US manipulating Nepal and MCC a geopolitical pact targeting China 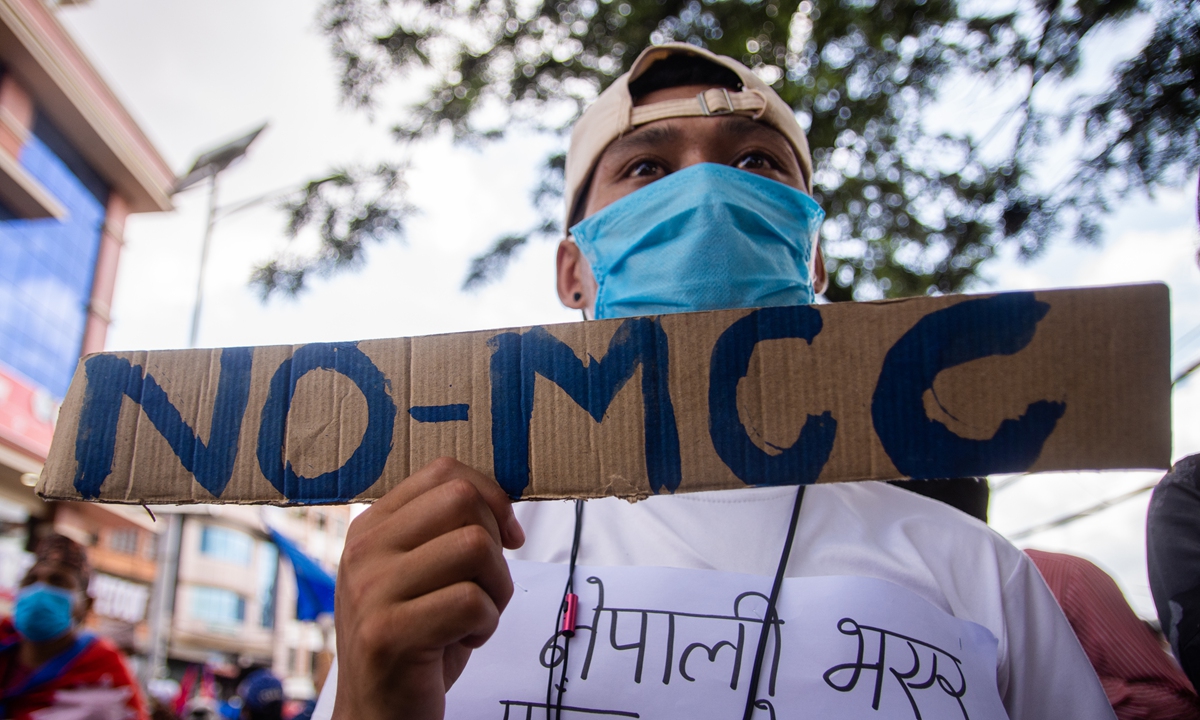 A Nepalese youth holds a cardboard sign during a protest against Millennium Challenge Corporation (MCC) programs in Kathmandu, Nepal, on June 27. Photo: AFP

The US' push for Nepal in terms of Millennium Challenge Corporation (MCC) and its once again baseless slander over China demonstrate that the MCC is nothing more than a pact with the geopolitical purpose of targeting China.
The US believes China has "actively fomented or encouraged or funded or facilitated" a disinformation campaign in Nepal against the proposed grant assistance from the US under the MCC, and warned Nepal that its failure to meet its commitments to the US by February 28 will have an impact on the US-Nepal bilateral relationship, the Hindustan Times cited a US state department spokesperson in a report on Monday. The US also said it would be "deeply disappointing" if "outside influence and corruption" led to a failure to ratify the project.

Nepal and the US signed the MCC agreement in 2017. The US said the deal is designed to improve the availability of electricity and increase road maintenance to advance connectivity, drive growth, and lay a strong foundation for new investment. But Nepal's Parliament has not ratified the compact. Kathmandu and other cities of Nepal have frequently witnessed protest rallies against the MCC deal. Critics of the compact in Nepal see it has undermined Nepal's sovereignty, integrity and constitutional autonomy.

Section 7.1 of the Compact reads, "The Parties understand that this Compact, upon entry into force, will prevail over the domestic laws of Nepal." Furthermore, its auditing will be done by American rather than Nepali auditors.

These critics also see the compact as a part of the US' Indo-Pacific military strategy. As Washington's Indo-Pacific Strategy clearly targets China, they do not want Nepal to get involved.
It can be concluded that Nepal's Parliament has not ratified the compact not out of China's so-called disinformation campaign, but Nepal's own domestic concern. The US' criticism of China is totally groundless. The US has smeared China with an attempt to achieve its own geostrategic goals by sowing discord and creating a rift between China and Nepal. The China-Nepal long-term friendly cooperative relationship is the very thing that the US is not willing to see. After the Biden administration came to power, it has continued its predecessor's strategy of suppressing and containing China in an all-round way, and taken every possible means to crack down on China, including any actions that it believes can disrupt relations between China and neighboring countries, harm China's national interests, and hinder China's development.

MCC from the very beginning was a geopolitical tool under the disguise of infrastructure construction. In 2019, then acting deputy assistant secretary for South Asia at the US Department of State David J Ranz said the MCC compact program was one of the most important initiatives being implemented in Nepal under the US Indo-Pacific Strategy, according to the Himalayan Times. Fully ratifying the MCC would mean tying Nepal to the US' anti-China chariot.
Nepal is a country with independent sovereignty. It has the right to decide its own foreign policy. Nepal is China's neighbor and the tradition of friendly exchanges between the two countries has lasted for thousands of years. The China-Nepal relationship is a model of mutual equality. Therefore, it's unlikely for the US to pry Nepal away from China and such an attempt has, of course, caused dissatisfaction from the Nepali side. It is believed that Nepal will make very careful consideration on whether to ratify the MCC deal.

The US has ramped up its efforts to stir up trouble surrounding China. It is a part of the US' strategy to contain China. The US sees China as its top strategic adversary, suppressing and containing it on all fronts. As the exchanges between China and its neighbors become more comprehensive and diversified, the neighboring countries are increasingly aware that they are used by the US as pawns to serve its purpose of containing China.
Nepal's attitude toward the MCC over the past five years is quite representative of China's neighboring countries. They are reluctant to take sides between China and the US, or even be reduced to pawns of the US. As a result, the US' attempt to incite the neighboring countries of China is increasingly opposed. The US' old trick of using China's neighbors to keep China in check has failed so far, and will not work in the future, either.
The author is head of the Department for Asia-Pacific Studies at China Institute of International Studies. opinion@globaltimes.com.cn