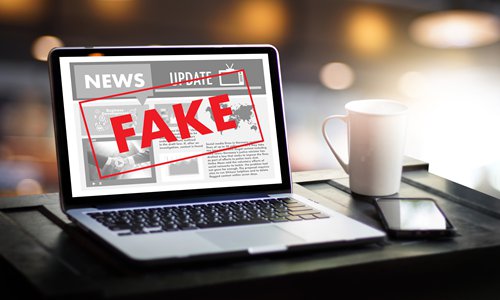 Some Indian media outlets have again provoked outrage among Chinese readers in a recent wave of distorted reports saying India detained Chinese troops for "crossing the borderline." This was soon dismissed by a Chinese military source as "purely fabricated and hyped by Indian media."
Some Indian media have long been criticized in the international community for their unprofessional reporting protocols and frequently exposed fabricated news, especially on issues concerning border disputes with neighboring countries, prompting Chinese readers and observers to explore the reasons behind it.
Observers pointed out that some Indian media outlets often distort or exaggerate facts to increase ratings and repeatedly tarnish China to cater to India's nationalist sentiment and its fragile self-confidence.

Journalists familiar with India's media reporting protocols told the Global Times that some outlets from the country rely more on alleged official "sources" than checking facts firsthand. The lack of expertise of some Indian journalists contributes to the unprofessionalism of their reports. Those groundless news were turned into bargaining chips of the Indian government in border dispute negotiations while the media were used as cannon fodder, they said. 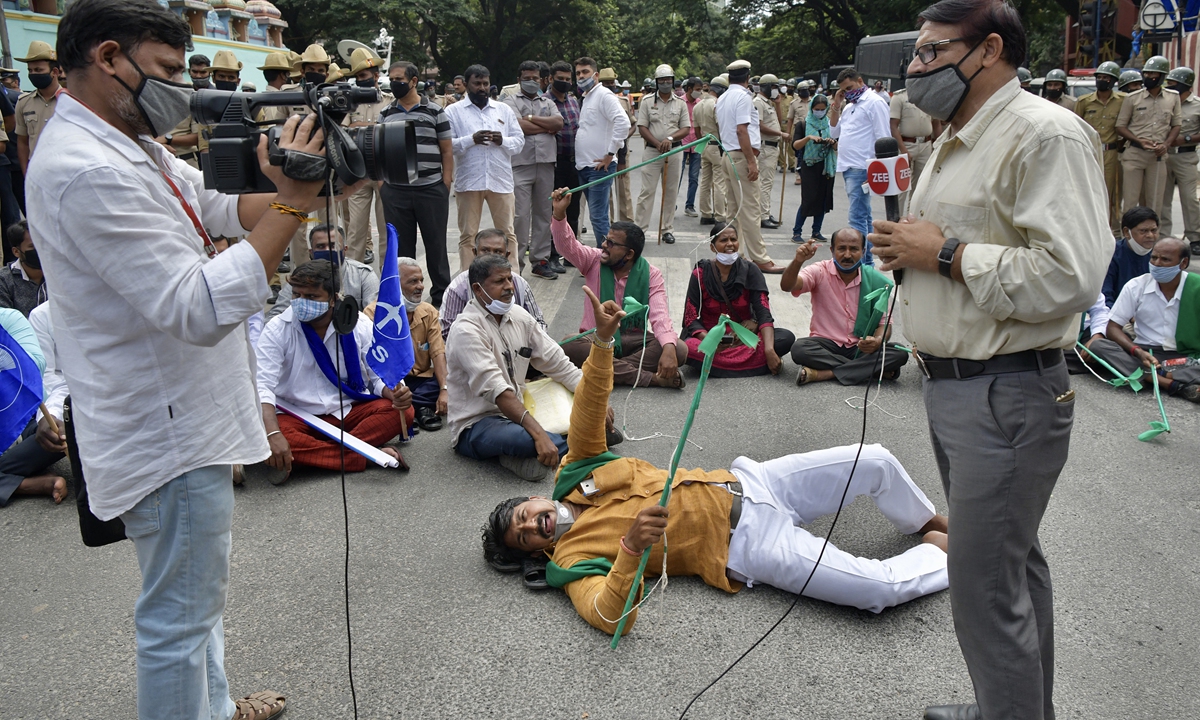 Recent reports from certain Indian media that Chinese soldiers were detained for "crossing the borderline" are purely fabricated. The Chinese border troops conducted a routine patrol when they encountered an "unreasonable obstruction" from the Indian military, a Chinese military source told media on October 9.

The distortion from those Indian media was not a surprise as its professionalism in news reporting has long been widely criticized among the media industry.

Journalists who are familiar with the tricks of Indian media reached by the Global Times scrutinized some of their typical labels including relatively poor professionalism, low barriers to entry, weak originality, little knowledge and bias against China.

Indian journalists control the content of the reports but unfortunately, many have weak professional experience in diplomacy or foreign affairs, Lu Qiang (pseudonym), a Chinese state media reporter covering news in India for years, told the Global Times.

Most Indian outlets rely heavily on Western mainstream media for reporting on foreign affairs, mainly because of the lack of solid sources, professional correspondents and enough overseas bureaus, said Lu.

Compared with other more rigorous mainstream media, many local or nationalistic outlets in India are prone to misread and even distort facts on some diplomatic issues, Lu told the Global Times, adding that the nationalistic sentiment of individual journalists can also be seen in their reports.

Worse still, although Indian media have a lot to say about China, many of Indian journalists covering stories related to China actually know little about their biggest neighbor, according to Yuan Jirong, former correspondent of the Global Times who worked in India between 2016 and 2019.

"They know almost nothing about China," Yuan told the Global Times, adding that "most of the time they cover China based on their imagination."

Yuan recalled that around 2016, there were only "three or five" registered Indian reporters working in China and India's news websites usually used incorrect pictures irrelevant to the city or individuals the articles mentioned.

Yuan referred to the editor of an Indian TV station he met in New Delhi, who he thinks is a "relatively rational and friendly-to-China guy." The editor talked to Yuan about his trip to China to cover the 2016 Group of Twenty (G20) summit in Hangzhou, in East China's Zhejiang Province.

"He told me that was his first time visiting China. He felt that Hangzhou was so clean and beautiful and was impressed by China's modern infrastructure, including the high-speed railway," Yuan recalled. "He said he had seen China's development and changes these years, but unfortunately, his [positive] voice could hardly be heard," noted Yuan. Media representatives hold umbrellas during a rainfall as they wait for the Indian Prime Minister Narendra Modi in New Delhi on July 19, 2021. Photo: AFP

India's other neighbors, including Nepal and Pakistan, have also become victims of its fake news campaign, journalists from both countries told the Global Times.

"Nepal has become the victim of such fake propaganda disseminated by some Indian media," Pushpa Raj Pradhan, Editor-in-chief of the Nepalese media People's Review Weekly, told the Global Times.

A spate of fabricated, hyped China-Nepal and China-Bhutan border disputes have previously raised the alarm in China, Nepal and Bhutan as some Indian media repeatedly quoted groundless sources on false territory encroachment allegations and defamation against neighboring countries. Experts say such backstage sources are likely Indian political factions who see both Nepal and Bhutan as their protectorates.

Analysts said some Indian reports lack discipline and hype topics to cater to the nationalist sentiment amid intense press competition, calling such media a "poison" for regional peace and stability.

Instead of pursuing the truth with journalist ethics, some Indian media outlets fabricate lies to draw attention. This has become their habitual way of reporting, analysts said.

"My impression is that some Indian media are the biggest factory of fake news,"  Rajan Karki, an editor working with Nepali media Gorkha Express told the Global Times. "This hurts the South Asian nations," Karki said.

Muhammad Zamir Assadi, a journalist from Independent News Pakistan, said that manipulation of news and intentional spread of false content by some Indian media have damaged their domestic and international credibility among the targeted audience.

The practice by some Indian media of spreading the fake news resonates with their interest just to gain ratings among misguided viewers who do not have the capacity or rational judgment to discern news content, Assadi said.

"The malicious habit of creating fake news has deepened into the roots of some Indian media that do not care about even the basic ethics of journalism," he told the Global Times.

Certain Indian media's fake news against Pakistan has become so common that even the independent international organizations have exposed their true face in spreading false news, Assadi noted.

"We have seen the evidence that EU DisinfoLab, a Brussels-based nongovernmental organization, has also very clearly pointed out that large numbers of fake websites were established in past years to serve and protect the India interests," Assadi said. These websites were used internationally to "win the favorable views about India on various aspects and to spread propaganda against Pakistan and other countries," he added.

The campaign is not only violating the ethics of journalism but also breaching international norms and values that are a set standard for keeping the operations of global affairs, Assadi said. Indian Border Security Force personnel take part in a rehearsal for an upcoming show in Ahmedabad on August 23, 2021. Photo: AFP

Apart from the market orientation, which prompted some Indian media to cater to readers with exaggerated, eye-grabbing China-related stories, some news outlets in India also play a puppet role for the country's government and military by being an accomplice of the Indian authority's smear campaign against China, front-line correspondents and scholars on Indian issues said.

In recent years, Indian TV stations, newspapers and websites have often published fake news against China when there are exchanges between top officials of the two countries, such as a visit to India by the Chinese national leader, or both countries holding talks on border issues, Yuan said.

The recent rumor saying that "Chinese soldiers were detained for crossing the borderline," was for instance hyped by some Indian media during the 13th round of corps commander-level talks earlier this month, Yuan noted.

"Each time like this, the Indian government or the military will release misinformation to deceive the public opinion through local media, which spread the rumors by simply quoting 'sources' or 'insiders,'" Yuan told the Global Times.

Regarding China as its biggest adversary, the Modi administration has been using the anti-China propaganda campaign to stir up a nationalist sentiment and to divert attention from its domestic contradictions, said Hu Zhiyong, a research fellow at the Institute of International Relations under the Shanghai Academy of Social Sciences.

"From the Donglang [known as Doklam in India] incident in 2017, to the Galwan Valley clash last year, Modi is attempting to magnify the border issues with China, particularly since his second term," Hu told the Global Times.

By stirring up troubles against China and other neighbors, Modi tries to divert the public's discontent toward the BJP which failed to control the spread of the COVID-19 and prevent the economic slump amid the pandemic, Hu said. "The Modi administration is eager to build an enemy," he added. A man pushes a cart loaded with newspaper copies in Navi Mumbai on July 1, 2021. Photo: AFP

From border issues to the COVID-19 origins-tracing, some Indian media outlets have been creating and spreading misinformation against China with impunity.

By building China as a major rival or even enemy, the Modi administration attempts to instigate Indian people's nationalist sentiment and to divert the public's discontent toward domestic chaos amid the pandemic.

The following are some of the fake news published by some Indian media outlets in slandering against China this year. They make groundless China-related stories similar to these almost every day.

Fake: "100 PLA soldiers with 55 horses crossed the border with India's Barahoti and damaged some infrastructure, including a bridge," Economic Times reported on September 28.

Fact: In response, a Chinese military source was quoted by Chinese media as saying that the report was completely fabricated. It was actually a routine patrol of Chinese border troops on the Chinese side of the China-India border.

Fake: The Times of India published a report titled "Escape from Wuhan: Coronavirus lab leak theory gains traction" on May 20. It quoted conspiracists as saying that "there is 'significant circumstantial evidence' the COVID-19 outbreak stemmed from a leak at the Wuhan Institute of Virology."

Fact: China has refuted the lies of the "lab leak" theory many times. China has strictly fulfilled its obligations under the Biological Weapons Convention and does not develop, research or produce bio-weapons.

Fact: China, on February 29, officially unveiled details of the casualties - five officers and soldiers, four of whom died while dealing with the Indian military's illegal trespassing of the Line of Actual Control (LAC) at the Galwan Valley.

Fake: "China and Indian troops had clashed at Naku La in the north Sikkim border area," and "at least 10 soldiers from both sides had sustained injuries," reported Times of India on January 25.

Fact: There is no record of this incident in the Chinese People's Liberation Army (PLA) front line patrol logs, the Global Times learned. If there had been friction involving casualties, it is impossible for them not to be recorded in the Chinese patrol logs.