The Indian Tactics Of Hegemony

A 1982 report published by the Central Intelligence Agency read that India has been pursuing a foreign policy of maintaining a hegemony over its neighbors since becoming an independent state in 1947. The report also claimed that the effects of the Indian military have been well-established in these neighbor-states.
Even though the Maldives and India enjoy close relations, with deep roots in history; many believe that India has attempted to, and continues to dominate and influence the Maldives in various ways. Among them were the former Maldivian Minister of Foreign Affairs, Fathullah Jameel.
Addressing the United Nations, Jameel decried the tendency of large, powerful countries of exploiting the misfortunes of their smaller, poorer neighbors; and he observed that smaller countries were not as sovereign and free as larger ones. Jameel’s statements are believed to have been made in reference to how; in the aftermath of the November 3, 1988 attacks in Male; India had stationed military personnel in the country and had refused to recall them despite the requests of the Maldivian government.
Today, India and the Maldives have a very deep and close relationship, and the Maldivian state has developed a dependence on India and its assistance.
Many in the Maldives say that India has intentions for establishing a military base. Such an establishment can, however, only be possible with the unanimous vote of the People’s Majlis as per Article 251 ( c ) of the Constitution. This clause does not prevent the presence of military personnel in the country. The approval of the Majlis would not be necessary for the stationing of the Indian military under other pretexts. 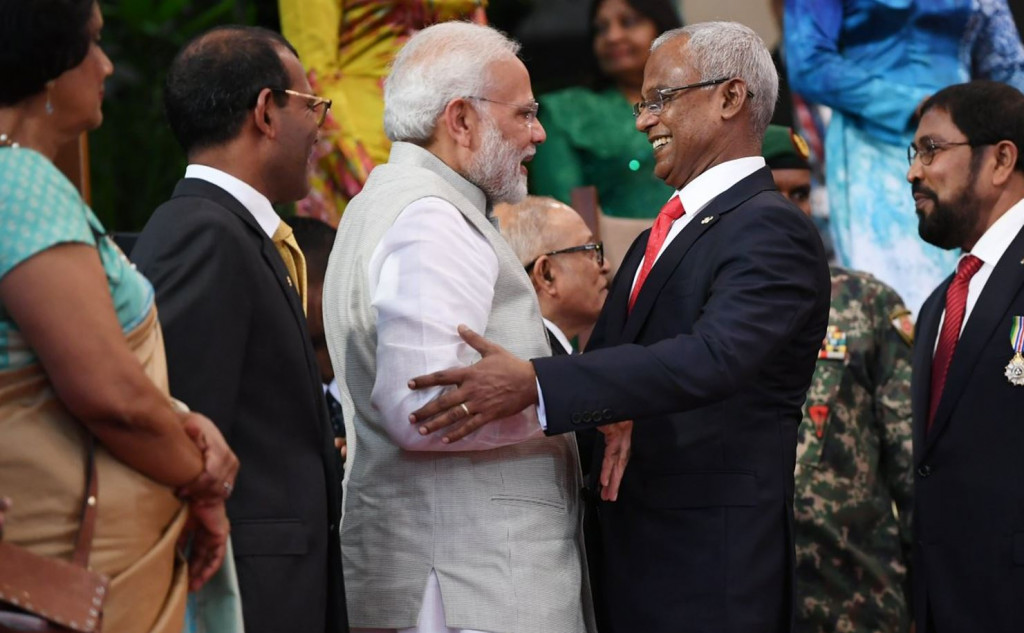 The case of the two Indian helicopters “gifted” to the Maldives highlight some of these pretexts.
The first of the military helicopters were gifted to the Maldives during the first MDP government, under the presidency of Mohamed Nasheed. The claim was that the MNDF would be trained to fly and maintain the helicopter and that the Indian military personnel would leave once they had been appropriately trained.
The Maldivian government had requested India to take these helicopters back in 2018, ten years later, as the MNDF were excluded from using these helicopters, and nor had any MNDF serviceperson been trained in flying them. India refused to comply.
The Indian military personnel sent to the Maldives with the helicopter still remain.
What changed was that the government, administered by Yameen Abdul Gayyoom, lost the presidential election and was replaced by what has been described by the Indian media as a “friendly” government. In the subsequent months, many government projects, backed by Indian investment, were announced.
Also in 2018, the Supreme Court released a verdict that plunged the Maldives into political turmoil. Described by some as a “judicial coup”, this verdict roused the Yameen administration to crack down on many high-ranking opposition politicians. Opposition politicians, the American and British ambassadors, and Indian officials looked on in anticipation. The Irish Times reported that an Indian official had claimed that the Indian navy and the Special Forces were ready to invade the Maldives and establish order.
Many months later, BJP parliamentarian, Dr Subramanian Swamy, warned that India would be forced to invade the Maldives if the 2018 presidential election were to be rigged. Many have claimed that evidence of such “rigging” would be if the election results displeased India. 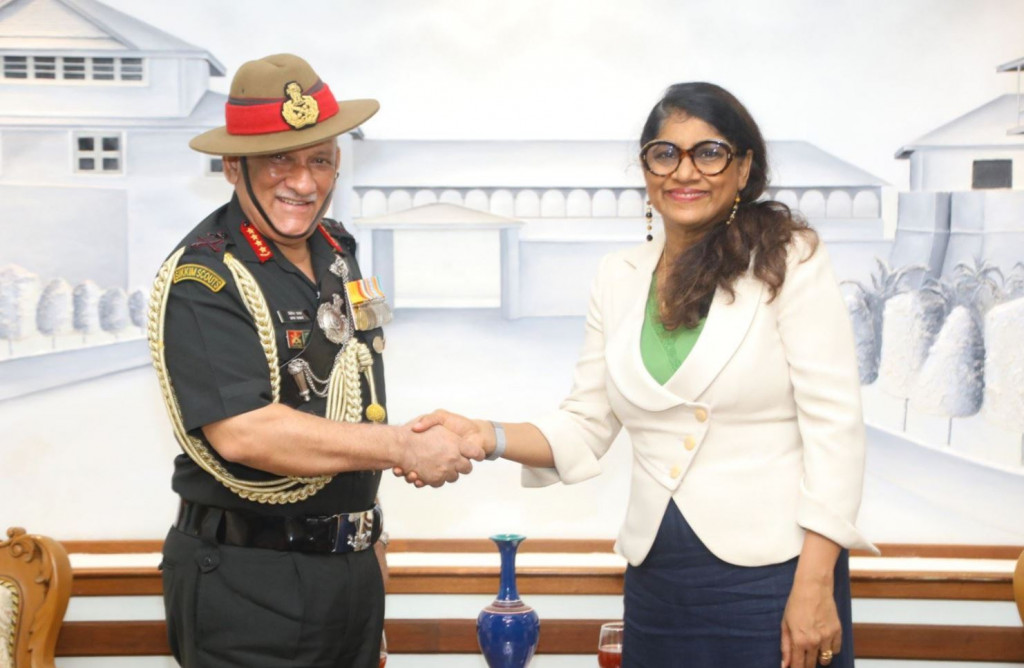 Indian Chief of Defence Staff General Bipin and Maldivian Defence Minister Mariya Didi
The Seychelles found itself in a similar circumstance as the Maldives vis-à-vis India, and like the Maldives it found itself being offered a USD$ 100 million line of credit. The condition for this offer had been to allow India to establish a military base in Assumption Island. A similar, forthright offer may not be possible in the Maldives given Article 251, as India would be well-aware. Even so, it is well within India’s power and interests to set up a military base without a military base in the Maldives.
Bhutan is an isolated, poor country in the Himalayas just beyond India’s northern border. In 1949, Bhutan signed a treaty of alliance with India and, under the terms of this treaty, began to conduct its foreign policy as per Indian instruction. In addition, all matters pertaining to defence and security would be overlooked by New Delhi.
Today, a permanent station of the Indian military is in operation within Bhutan.
In 1961, the engineering department of the Indian military initiated a programme known as DANTAK in Bhutan. In exchange for remaining a strategic outpost for India were the construction of large roads, the upgrading of airports, and other improvements to the Himalayan kingdom’s infrastructure undertaken under the auspices of DANTAK.
Many believe that Nasheed’s agreement with India may involve some of the aforementioned matters. Today, a police training academy is under construction in the southernmost tip of the Maldives, Addu City. According to reliable sources, all construction is being carried out by Indian contractors. Although work on this site had been halted during the Yameen administration, construction has since resumed.
Not long after the MDP’s electoral win in 2018, Nasheed returned to the Maldives from self-exile in the United Kingdom and travelled to Addu City. Addressing his admirers in a speech, he said that a “new Cold War” was brewing in the Indian Ocean, and the rivalry between China and India could only be put peacefully to rest in Addu City. Characteristically, never mentioned how such a peaceful solution could be achieved.
Some have since questioned whether this solution was related to the Indian-financed police academy in Addu City. 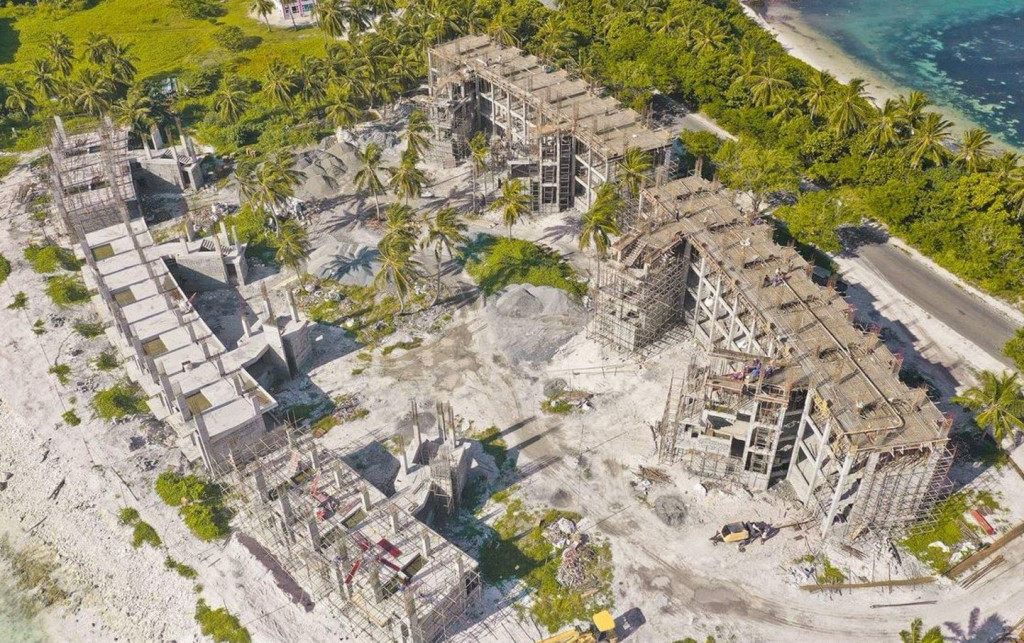 Indian financed police academy in Addu.
The Nikkei Asian Review published an article in 2018 which gave some credence to the aforementioned points. It read that “India is considering providing up to $1 billion in loans to the Maldives to help it pay down its debt to China, but only if the island nation agrees to distance itself from Beijing” and that “India is in talks with the Maldives, offering low-interest loans over several installments in exchange for stronger security ties, including the permanent deployment of Indian military personnel in the island nation”. It is worth noting that there has been no explicit mention of a military base in connection of the permanent deployment of the Indian military. India, as history shows, is no stranger to such tactics, and the Maldives has also been on the receiving end.
Article 251, as it currently stands, provides no protection from India’s machinations.
source-5Y9HMPmRXyAqJTgyZPuG1lrZCcc4R5VAG6yyJBr2RrE41l4w8V2gs