The 35-km-long Uttarey-Chiwanbhangjyang road will link western Sikkim in India not just to areas on the Nepali side of the border but to western Nepal. 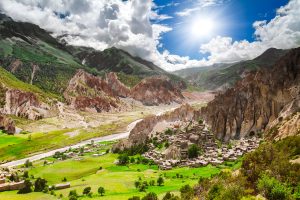 A 35-km-long road linking Uttarey in the eastern Indian state of Sikkim with Chiwabhanjyang in eastern Nepal is making life easier for people in remote villages in the eastern Himalayas.

Importantly, in addition to improving tourism and trade ties between the two countries, it could provide a boost to local livelihoods.

According to N.K. Subba, minister of urban development and housing in the Sikkim government, “The area has been witnessing a steady rise in the flow of tourists for the past six-seven years. The road will provide another entry point for tourists. Trade between Sikkim and eastern Nepal will also get a fillip,” he said.

Uttarey lies at an altitude of 6,600 feet in western Sikkim while Chiwabhanjyang in Nepal is at a height of 10,500 feet. The road linking the two border towns provides stunning  views and access to picturesque trekking routes.

Prior to the opening of the new road, Sikkim Armed Police (SAP) assigned at the Chiwabhanjyang check post had to trek to the check post and back. It was a tough uphill slog on foot for almost 2-3 hours every day to reach Chiwabhanjyang. The new road will make life easier for them now.

At the Paanchthar checkpost on the Nepali side of the border, there are around 23 personnel of the Nepal Armed Police Force (APF). They see the road as a means of bringing  India and Nepal closer.

Get briefed on the story of the week, and developing stories to watch across the Asia-Pacific.

“There are going to be tough times between two nations. But we are human beings, and we need to feel the sense of being together, and friendship should last forever,” an APF official said.

A sense of togetherness is evident at the water source on the Nepali side, which is meeting the needs of Indian and Nepali officials.

It will be easier now for tourists from Sikkim and West Bengal in India to travel to Pathibhara and Kanchanjunga through the Chiwabhanjyang border point.

People engaged in farming and agriculture in the border areas can travel by road now to sell their products — including ginger, large cardamom, honey, ghee, and other milk products — on the other side.

In the past, Nepalis from Chayangthapu, Phalecha, and the remote areas of Yangwarak Rural Municipality, where Chiwabhanjyang lies, used to use an old trekking trail to engage in barter trade of daily essentials. They will now make the journey by road.

Samir Subba, a frequent traveler from Nepal to Sikkim, is happy with the new road.

“With the road connectivity, we can now easily travel to Sikkim to sell our produce there. In the past, we had to travel to Uttarey village in Sikkim since there were no motorable roads and all we had to depend on was the old trail. But once the border point officially opens, we can cross into Sikkim and back without hassles.”

But the new road is not just about easing travel and trade between border villages and towns. The new road from Uttarey to Chiwabhanjyang will hook Sikkim onto a Nepali highway that runs from Nepal’s far east to the country’s far west. Thus people and goods can travel overland from Sikkim and West Bengal in India across the breadth of Nepal to reach Darchula in western Nepal.

One section that is not too happy with the new road are trekking guides. In the past, they were doing good business as people needed their guidance and help to travel.  That has now changed.

“The new road will hit the livelihood of those who earned mainly from providing service as trekking guides. Picturesque trek locations are likely to change into picnic spots as people can now access the place with the help of a vehicle, said Tshering Sherpa, a local guide.

There is concern too over the fate of fresh water sources.  The construction of the roads in the region will block these water sources, people fear.

Will the road linking Sikkim to Nepal prove to be a boon or bane to people living there?

Arun Budhathoki is a Nepalese journalist, poet, and writer. He tweets at @arunbudhathoki.