The Assam government ordered a judicial probe into the Dholpur Gorukhuti clashes that led to death of two people. Several people, including nine policemen, were injured during the incident. Two people were killed in the clashes in Assam. (Screen grab)

At least two protesters were killed and many others, including nine police personnel, injured during clashes between police and locals at Dholpur Gorukhuti area in Assam's Darrang district on Thursday.

The clashes broke out at a time when a team of security personnel went to the area to evict illegal encroachers from the land belonging to a state farming project. When the security personnel reached the area, thousands of locals gathered and raised slogans against the eviction drive. The Assam cabinet had earlier taken a decision to recover the land completely from encroachers and convert it to a state farming project.

A judicial probe has been ordered by the Assam government in the incident after reports and videos of police brutality emerged. 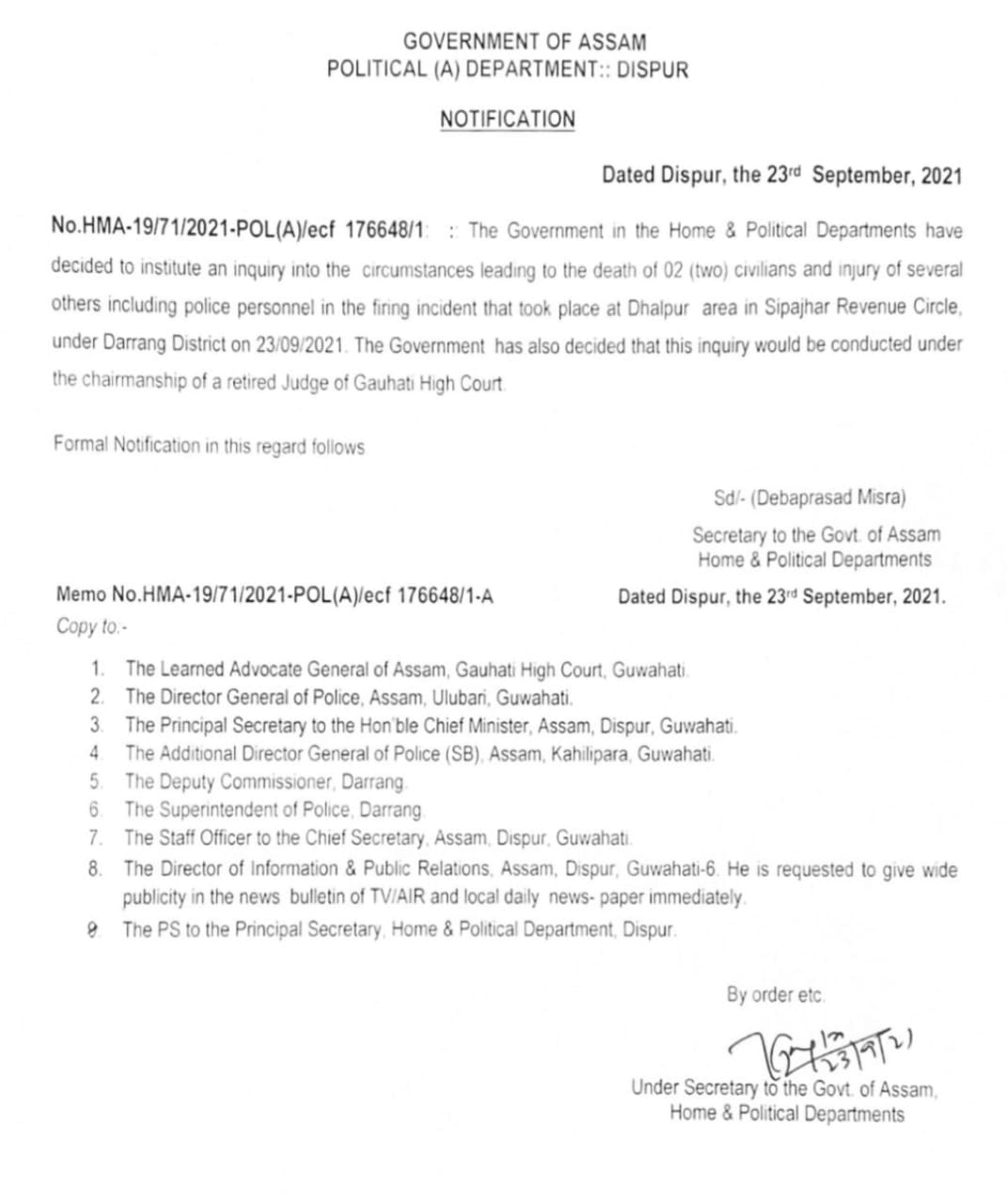 Meanwhile, a purported video of the incident has gone viral on social media where a photographer is seen kicking a person, presumably dead. The video shows hundreds of policemen firing at unseen targets from behind the trees, and a man in vest and lungi running on a dusty street. A photographer ran behind him until the time the men in uniform surrounded the man as gunshots rang in the background.

The photographer was seen being led out by a policeman, but soon returned, jumped over his body, and hit him with something he had picked up lying close by. The man's left arm lifted momentarily, before he lay still, with a red circle of blood from a bullet wound on his chest, and a 'Gomosa', the traditional stole associated with Assamese pride, lying crumpled beside him.

Bijay Shankar Baniya, a professional photographer, hired by the district administration to document the situation, has been arrested.

Around 12.30pm, thousands of protesters gathered in the area and engaged in heated argument with security personnel and officials of district administration. Around 1.10pm, some protesters started pelting stones at the police and attacked them with sharp weapons. This led to police firing in the open and using tear gas shells.

Condemning police firing on Dholpur residents, Congress leader Rahul Gandhi tweeted, "Assam is on state-sponsored fire. I stand in solidarity with our brothers and sisters in the state- no children of India deserve this."

"The Supreme Court had also given a directive against eviction during pandemic situation yet the Assam government led by CM Dr Himanta Biswa Sarma has remained adamant behaving in an autocratic manner to evict the residents of Dholpur who have been living in the area since the 1970's," he said.

Bhupen Kumar Borah said that before eviction, the government should have arranged for rehabilitation and alternative housing.

"The people in the area have been subjected to harassment repeatedly by the BJP government since they came to power in 2016. Without alternative arrangements for land and housing where will these poor people go and how will they survive? They are mostly cultivators and their source of sustenance is being attacked. A government's job is to work for welfare of people and not create problems for people by making them homeless without food, shelter , education which are basic human rights," Bhupen Kumar Borah said.

"We demand that CM should first rehabilitate the people and not evict them forcefully. It is becoming very clear that the BJP government only knows how to govern through the might of the bullet as seen in fake encounters and now in open firing on people. Such type of governance is highly condemnable and is dangerous for a democratic society," Bhupen Borah added.

The Congress warned the BJP government to not indulge in actions that will turn Assam into a police state and has sought judicial probe into the incident.

Many organizations, including All Assam Minorities Students' Union (AAMSU), have staged protest against the incident in Morigaon, Darrang and many other parts of the state.

Over 800 families were rendered homeless after the Assam government carried out a massive eviction drive Dholpur Gorukhuti village in the Darrang district on Monday. The government recovered 4,500 bighas of land. The village is populated mostly by Muslims of East Bengal origin.

The first eviction drive in the village was conducted in June after which a fact-finding committee visited the area. The committee had stated that 49 Muslim families and one Hindu family had been uprooted in the drive, which local newspapers said had “cleared” 120 bighas of land (1 bigha is around 900 square yards), purportedly belonging to “pre-historic” Shiva temple, according to a news report.

Some residents of Dholpur Gorukhuti told a news organization that the number of evicted families was more than 900, which would take the count of affected people to at least 20,000.

The project was announced by chief minister Himanta Biswa Sarma after he visited Dholpur Gorukhuti, a day after the first eviction drive had been carried out by the district administration on June 7.