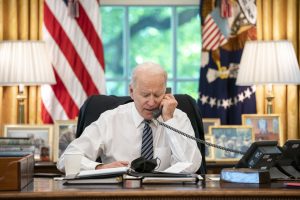 The Biden administration recently announced its review of US policy toward the Democratic People’s Republic of Korea (DPRK) is complete. While some signs are encouraging, such as the appointment of Ambassador Sung Kim as special representative for North Korea Policy, others are disappointing and risk undoing some of the gains made by former President Donald Trump and Chairman Kim Jong Un at the 2018 Singapore Summit. There remains an unfortunate denial of the gains made by Trump’s unusual, transactional negotiating approach, which led to an ongoing three-year de facto moratorium on North Korean testing of nuclear weapons and intercontinental ballistic missiles (ICBM). While the 2019 Hanoi Summit ended with no agreement, Trump’s personal style of diplomacy helped sustain a relative calm on the Korean Peninsula over the past three years, and set the precedent for continued US high level engagement with North Korea.

President Joseph Biden’s recent statement that he would not meet with Chairman Kim (absent preconditions, including setting parameters for further diplomatic discussions regarding the DPRK’s nuclear arsenal), risks undoing the diplomatic achievements made during 2018-2019 and returning to a failed Obama-era policy of strategic patience. The Biden administration claims otherwise, but doing so lacks a degree of empathy, nuance and sensitivity as to how Kim will perceive, and respond to, such wording. This begs the question then of how might President Biden approach and negotiate with Chairman Kim? What, if anything, can be learned, from President Trump’s approach?

When I have given talks to senior national security personnel, academic scholars and business leaders regarding a leader such as North Korea’s Chairman Kim Jong Un, the question that always comes up is, “can we do business with him? Is he a rational actor and reliable negotiating partner?” Based on analytic methodologies used to study Kim’s leadership style, there is now common agreement among the US intelligence community, as well as South Korean national security officials, that he is an aspirational, ruthless, shrewd, mature, pragmatic, responsible and talented leader, who during 2018-2019 negotiated on an equal level with other powerful leaders, including America’s Donald Trump, China’s Xi Jinping, Russia’s Vladimir Putin, South Korea’s Moon Jae-in, Vietnam’s Nguyen Phu Trong and Singapore’s Lee Hsien Loong.

Importantly, Kim’s leadership style continues to evolve, with a heightened focus on recovery from COVID-19, economic development, and increased delegation of authority within the DPRK’s decision-making apparatus. This is apparent with Kim’s creation of a new “first secretary” position within the Workers’ Party of Korea (WPK)’s Central Committee, reporting directly to Kim. Recent media reports and rumors suggest that a close aide, Jo Yong Won, will be appointed to the role, whereas others have indicated that Kim’s sister, Kim Yo Jong, could assume the position, acting as a de facto successor to Chairman Kim.

It remains unclear if such leadership changes portend future diplomatic negotiations at levels below Chairman Kim. For if there is one thing that countless generations of experienced foreign diplomats have learned—as far back as President Carter’s 1994 negotiations with Kim Il Sung regarding the 5 MWe Reactor at Yongbyon—it is that for progress to be made diplomatically with the DPRK, negotiations must begin at the highest level. And today, that still means Chairman Kim Jong Un. The larger questions are whether the new first secretary will have the ability to provide nuance and depth to future diplomatic negotiations involving Kim; and if that person will have greater negotiating authority, will he/she usurp the role of others such as Ri Pyong Chol, Kim Yo Jong or Choe Son Hui?

Other media have suggested this new position represents a “safety valve” of sorts for Kim regarding succession, given media reports of his potential health issues during 2020. However, Kim’s recent presence at various high-level governmental meetings and his apparent improved health and purported weight loss may suggest otherwise. Kim’s appointment of a new first secretary should be seen as a confident posture, rather than a risk mitigation move related to his health.

While North Korea’s media has criticized President Biden in 2019 (calling him a “rabid dog” who is greedy for power and deserves to be beaten to death), comments following announcement of the administration’s North Korean policy review have been, by North Korean standards, fairly muted.[1] The fact that the news came from White House Press Secretary Jen Psaki—and not from President Biden—likely speaks volumes to Chairman Kim. However, President Biden’s naming of the highly-experienced Special Representative Ambassador Sung Kim, while an inspired choice, lost some of its luster when it was announced that his role would be “part-time.” Again, Chairman Kim might perceive this as a devaluation and a diplomatic insult, especially in comparison with China’s recent appointment of veteran Ambassador Liu Xiaoming as special representative on Korean Peninsula affairs.

For Kim, a denial of legitimacy—also reflected in President Biden’s later remarks that he would not negotiate directly with Kim—implies that he, and North Korea, lack importance to the US and are a “part-time” concern. The risks of such an approach involve, at a minimum, a quiet increase in its nuclear arsenal (now thought, according to Dr. Siegfried Hecker, to be 45 weapons); or worse, a resumption of nuclear and/or ICBM testing.

President Biden has already done much to rebuild America’s alliances in Asia, given his summits with Japan’s Prime Minister Suga and South Korea’s President Moon. And he has shown boldness in agreeing to meet with Russia’s President Putin on June 16. This begs the question that if Biden can grant legitimacy to Putin and Russia—in recent years accused of hacking US elections, attempting to assassinate (with a chemical weapon, Novichok) former GRU (GU Intelligence Service) officer Sergei Skripal and Russian opposition leader Alexei Navalny, and most recently, hacking into US government infrastructure (Solar Winds) and giving sanctuary to the DarkSide ransomware attackers—why can’t he do the same with Chairman Kim, in the search for a durable peace on the Korean Peninsula? Surely President Biden can utilize the 2018 Singapore joint statement and former Special Representative Steve Biegun’s January 2019 speech at Stanford as useful starting points. But this requires that Biden see the world through Chairman Kim’s eyes and psyche. And given his vast foreign policy experience, Biden knows that in negotiations, personal relationships, rapport and empathy truly matter. This requires his meeting with Kim, and taking his measure, and vice-versa.

President Biden’s age—perceived by some as a hindrance, or even a risk—may also offer an opportunity for novel diplomacy. But time is not on his side, as other diplomatic and US domestic political pressures will likely intercede as the year wears on. But by taking a first step, President Biden can earn—as did President Trump during the 2018 Singapore Summit and 2019 visit to the Demilitarized Zone (DMZ)—Kim’s respect. And respect matters! It can lead to bolder initiatives and the hope of a lasting, durable peace on the Korean Peninsula. This is a key moment for President Biden, and our Asian allies, as well as adversaries such as Russia and China. All are watching closely, and the time to act boldly is now.