Kim Il Sung (1912-1994), eternal President of the Democratic People’s Republic of Korea, was a great man born of the 20th century. Everyone, be he a statesman or a commoner in the East or West, was attracted to him at first sight. What was his charisma?

Kim Il Sung (1912-1994), eternal President of the Democratic People’s Republic of Korea, was a great man born of the 20th century. Everyone, be he a statesman or a commoner in the East or West, was attracted to him at first sight. What was his charisma?

What was most impressive about President Kim Il Sung was a smile as warm and bright as the sun.

His shaking hands with people and hugging them with a warm and accommodating smile on his face made them feel human ties with him being formed at the moment. With a smile filled with good will and human feeling, he made their hearts radiant, and with an open heart and magnanimity, he would read even their inmost thoughts.

Josip Broz Tito, President of former Yugoslavia, who was an outstanding statesman in the Non-Aligned Movement and famous for being too self-respecting, once said that he had met heads of state of many foreign countries, but it was only Kim Il Sung whom he came to understand and got intimate with so quickly.

Stephen Solars, chairman of the Asia and the Pacific Subcommittee of the House Committee on Foreign Affairs, who visited Pyongyang as the first politician of the United States, a country hostile towards the DPRK, and met President Kim Il Sung, said to the reporters: I talked with President Kim Il Sung for about four hours; he said always wearing a smile on his face, and I got an impression that he is a tender-hearted man.

All those, who met President Kim Il Sung, said that they felt quite free in front of him.

Though he enjoyed high prestige in the international arena, Kim Il Sung approached all people unreservedly without any authority, prejudice and formality. Going far beyond diplomatic convention, he would meet them in a family atmosphere, inquiring after their family members, and approach those whom he was meeting for the first time as friends and old acquaintances of his own. His talking, full of humour, episodes and interesting stories, made the atmosphere congenial, pulling down the barriers of border, political view and religious belief.

Selig Harrison, who met Kim Il Sung in May 1972 as a research fellow at the Carnegie Endowment for International Peace, said: President Kim Il Sung accepted my questions in a quite easygoing manner, was cooperative and answered the questions in terms easily understandable; he was a tender-hearted man, possessed of the power of attracting people.

It was the same case with former US President Jimmy Carter, who visited Pyongyang in June 1994. He said: My talk with President Kim Il Sung went well as he was modest and unreserved.

It seemed as if President Kim Il Sung was born with warm human feeling.

Luise Rinser, a German author, had met heads of state and statesmen of many countries, but she said that the one that she really empathized with was only President Kim Il Sung of the DPRK. She was attracted to him as he approached her as an old acquaintance of his own and said that she was his long-time comrade-in-arms who had fought on the anti-fascist front. Out of her aspiration after truth and respect for the DPRK leader, she visited the country for 11 times between 1980 and 1992, meeting him 45 times. Former Portuguese President Gomez, Great King Norodom Sihanouk of Cambodia, US evangelist Billy Graham and many other foreigners had friendly relations with Kim Il Sung.

The root of the force that attracted the world to President Kim Il Sung, who made tireless efforts for the independence and peace of the world until the last days of his life was his human feeling of embracing all the people without any discrimination.

Miracle on the “Day of Death”

Ferdinand Magellan, Portuguese navigator and explorer who had sailed, under the flags of both Portugal (1505-12) and Spain (1519-21), entered the “South of the Sea” with three ships on November 28, 1520. During their crossing, the “Sea” was calm for months, and they later named it Pacific Ocean.

The ocean, however, has not always been calm as they thought. October 26, 1980 is registered in the world history of marine transport as a “day of death.” On this day a typhoon hit the Pacific unexpectedly, damaging many ships sailing on the ocean. Dozens of vessels of more than 10 000 tons were sunk. Over 740 vessels, medium and small-sized, disappeared near the southern area of the East Sea of Korea.

In the raging waters, Samjiyon of the Democratic People’s Republic of Korea safely returned.

What was the source of this miracle?

When she reached the middle part of the East Sea of Korea after leaving Japan, she entered the centrosphere of the typhoon. The ferocious waves struck the ship and tossed it up; the vessel was moving up and down almost vertically. The large tempered glass of the window of a passenger cabin on the third floor was broken to pieces, and more than 100 tons of seawater rushed an hour. The crew and passengers, numbering nearly 400, could not but give up the hope for survival.

Immediately after being briefed about the situation, President Kim Il Sung (1912-1994) organized a rescue command involving officers of the army and relevant sectors and technicians who had participated in designing and building the ship. He then said that he would personally take charge of the rescue operation. A ship can be built, but human loss is intolerable; the crew and the passengers must be rescued at all costs–this was his determination.

The aircraft and naval vessels of the Korean People’s Army, together with the large cargo ship Tumangang, left.

On hearing the news that the President was commanding the rescue operation, the crew and passengers rose up as one, and tried in every way to save the ship. 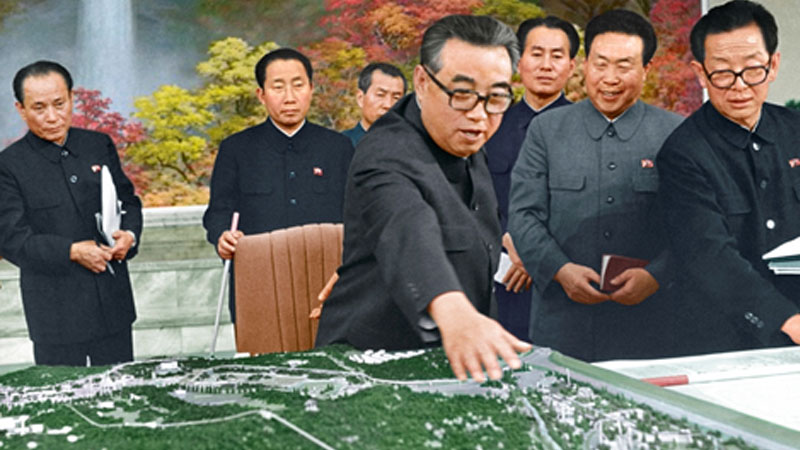 The aircraft and the vessels mobilized for the operation failed to give her direct assistance because of the raging waves and strong wind. And with the seawater rushing into the passenger cabin, the ship was thrown into the danger of being leaned over.

President Kim Il Sung, who was acquainting himself with the ship’s situation frequently and groping for the rescue measures, ordered to make the seawater converge in the lower part of the ship and pump it out with seawater and fire pumps. He then said: It seems a greater amount of seawater is rushing in because the ship is sailing against the wind; she must veer from the present direction; then the amount of seawater rushing in may decrease and she will gain speed.

After overcoming many hardships, the crew succeeded in veering; the amount of water rushing in decreased to four tons an hour and the ship’s speed increased remarkably. At last, the ship escaped the danger of being submerged.

When the officials were heaving a sigh of relief, Kim Il Sung said that they were yet to feel relaxed, that the seawater was to be pumped out without interruption, and that the naval and civilian vessels must follow her. He then designated the port of her destination, and ensured that measures were taken in advance for the convenience of the crew and passengers after she entered the port.

Samjiyon safely entered the port of Kim Chaek in the northeastern part of the country without any human loss.