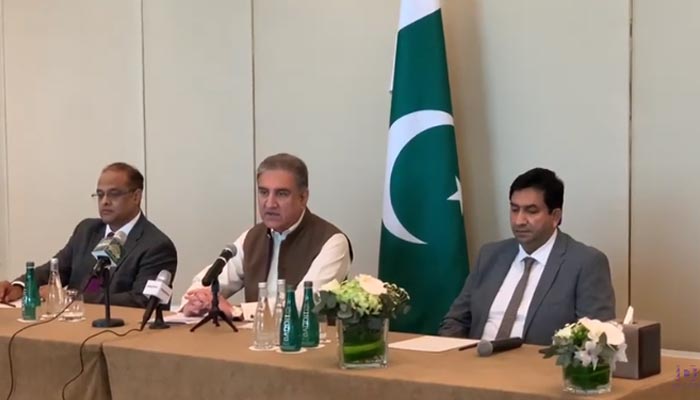 ABU DHABI: Minister for Foreign Affairs Shah Mahmood Qureshi has revealed that India is planning a surgical strike against Pakistan and warned New Delhi that Islamabad was respond effectively.

Addressing a press conference UAE's capital, FM Qureshi said he had received information "through our intelligence agencies" that India was preparing to launch a surgical strike against Pakistan and fanning a new wave of terrorism.

Terming the situation as sensitive, he said Pakistan was fully aware of India's conspiracies and vowed that Islamabad would respond befittingly should New Delhi initiate military action.

FM Qureshi said that India was "trying to seek tacit approval" from "important players who they consider to be their partners".

The foreign minister said that this misadventure, in Pakistan's opinion, was being done to divert attention from serious issues. "To begin with: The situation in Indian Occupied Kashmir."

FM Qureshi said that the situation was minimal, but now it has deteriorated further, and because of the current Indian regime's policies, there is a country-wide protest of farmers.

"The mishandling of the coronavirus by Indian authorities is known to everyone and the impact that it is having on their economy is known to all of you," he said.

The farmers' protest is growing as Opposition parties, civil society, and trade unions have expressed their support for them, he said, adding that the minorities were "uncomfortable in India."

"The citizenship act, the protests that you see in Assam because of NRC. They have not gone away. The Sikhs, Dalits, and Muslims are very disturbed," he said.

Keeping these points in mind, the foreign minister said that in India's opinion, it was a good way to unify a "divided nation".

"Pakistan [...] exposed Indian designs through a dossier on November 14, in which I highlighted irrefutable evidence of Indian sponsorship of terrorism in Pakistan," the foreign minister said.

The foreign minister said that the dossier had explained how the Indian soil was being used to finance terror against Pakistan.

"Pakistan is fully prepared to respond and defeat their designs. We will do it effectively, as we did respond immediately and effectively in February 2019," he said.

FM Qureshi warned India that Pakistan — if the nuclear neighbour does not move away from this path and their desire to do this misadventure — would respond effectively this time as well.

Urging the global community to play its part and not test Pakistan's resolve, he said that India's misadventure will undermine the region's peace and stability and will have catastrophic consequences.

Shedding light on this two-day visit to UAE, the foreign minister said that he held fruitful meetings with top officials of the Middle Eastern country.

FM Qureshi said that he had shared the situation of Indian Occupied Kashmir with his UAE counterpart and apprised him of the developments on the Afghanistan Peace Process.

The foreign minister said that he would also meet the UAE's head of intelligence to discuss several matters.

More than 750 Indian backed websites covering over 119 countries have been operational for about 15 years with the sole purpose of undermining Pakistan within the European Union and United Nations, a report on investigative research conducted by the EU DisinfoLab revealed.

The operation has been given a name — the Indian Chronicles.

EU DisinfoLab's investigation reveals that the Srivastava Group backed the operation, while a leading Indian news agency — Asian News International (commonly known as ANI) — was used to boost it.

Meanwhile, after FM Qurershi's presser, PM's special assistant Mooed Yusuf said that India's desperation had reached absurd levels if it thought of uniting the nation through a "strike".

Special Assistant to the Prime Minister on National Security Division and Strategic Policy Planning, Yusuf, in a tweet, said: "India's desperation has reached absurd levels if they think they can strike a united and proud nation that is a nuclear power."

Yusuf said that Pakistan had already informed the world about India's plans and that "some capitals were already aware" of its designs.

Yusuf reminded the world that Pakistan stands for peace and that it would respond if it was provoked.

"Let there be no doubt that Pakistan stands for peace but if provoked, our armed forces are fully prepared to thwart any aggression on our homeland and teach our enemy the lesson they deserve," he added.

Amid reports of India's bid to to destroy peace in the region by starting a false flag operation against Pakistan, credible sources said that India has been preparing for an attack on the Line of Control (LoC) and on the India-Pakistan Working Boundary.

Owing to the possibility of an attack, Pakistan's Armed Forces have been placed on high alert.

The sources said that India can resort to a border action or a surgical strike as part of its false flag operation.

The move is being planned to divert the attention of its public from several of its serious internal problems, including the mistreatment of minorities, farmers' protests, its growing atrocities in occupied Kashmir and the resultant criticism from international media and institutions.

Pakistan Army troops responded in kind to Indian aggression in the Khuiratta Sector along the Line of Control (LoC) earlier the same day, dealing heavy losses to the Indian Army in terms of men and material.