With hegemonic mentality, India is wary of China meeting in Nepal 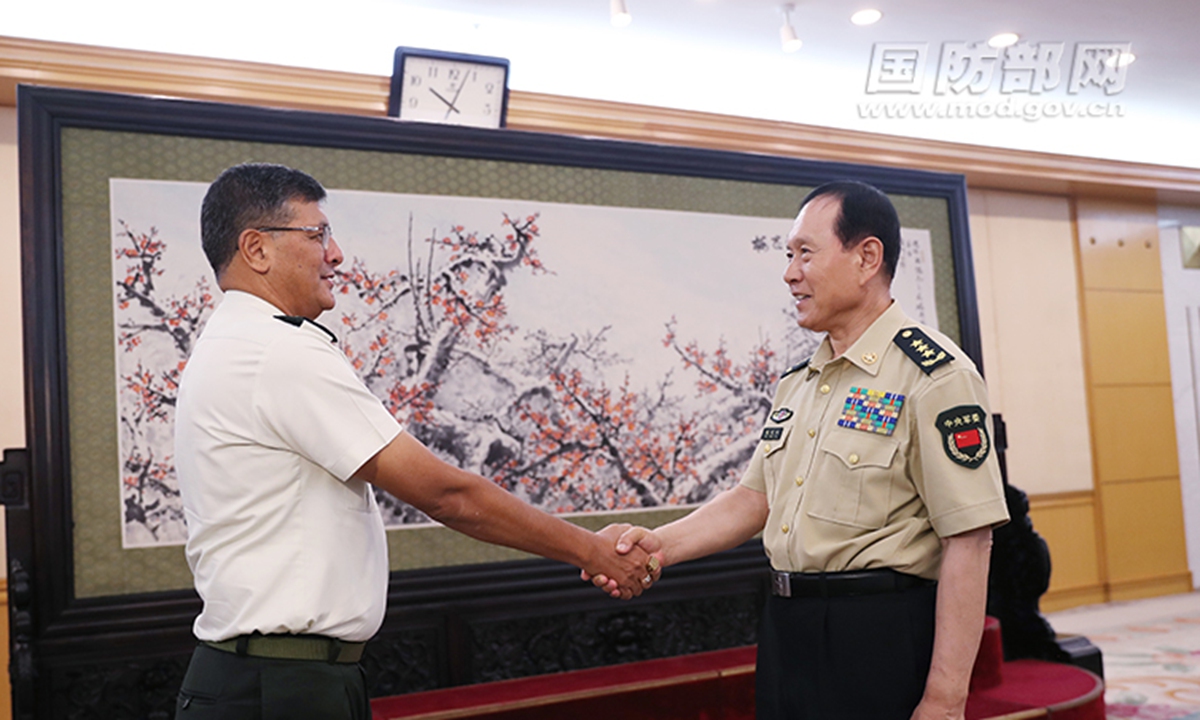 After Nepal Ministry of Foreign Affairs announced on Friday that Chinese State Councilor and Defense Minister Wei Fenghe will pay a one-day working visit to the country on Sunday, media speculation has mounted in India over what this tour might mean.

Military cooperation is supposed to be a normal part of China-Nepal bilateral interactions, yet it is always placed under the spotlight. The reason lies with India's sensationalist press.

Border tensions between China and India have not yet been defused. Meanwhile, New Delhi is confronting border conflicts with Kathmandu. Nepal's troops have shown resolute determination to safeguard its sovereignty with no sign of compromise. Indian Army Chief General Manoj Mukund Naravane thus paid a three-day visit to Nepal earlier this month with an unspoken goal: to reduce pressure from the Nepalese side. As a result, New Delhi gets uncomfortable to see any developments in China-Nepal defense cooperation.

There was a time when most of Nepal's arms deals were made with India. Starting in the 1980s, when Kathmandu started to purchase weapons from Beijing, New Delhi was furious, imposing a trade embargo on Nepal. Such moves also unveiled one of India's pain spots.

Developing military cooperation is of great significance for both China and Nepal, which have no territorial disputes. Yet due to its unique geographic position, Nepal used to be a transfer stop and refuge for secessionist Tibetans in exile. Strengthened military and police cooperation with Nepal will help secure China's border security and stability with the Tibet Autonomous Region.

By deepening military ties with China, Nepal can also maintain its own national unity and political stability. Nepal has relied heavily on India for military matters and its southern part is home to a large number of Indian descendants. Quite a number of Nepalese troops received training in India. Besides, India tends to interfere in Nepal's domestic affairs from time to time. All these factors are unfavorable factors for Nepal's national stability — hence the country hopes to pursue an independent diplomacy.

China and Nepal signed an agreement regarding 150 million yuan ($22.8 million) military aid to the Nepal Army during Nepalese Defense Minister Ishwor Pokharel's China visit in October last year, according to media reports. Media reports also note that, "a protocol for the same [deal as October 2019] is expected to be signed during Wei's visit." Such military assistance will help Nepal consolidate its own defense power, and play a positive role to resolve the issues mentioned above.

When Indian media outlets hyped up this meeting, they tended to hint that Wei's visit is coming closely on the heels of the trip made by India's Foreign Secretary Harsh Vardhan Shringla, and also by General Naravane. It should be made clear that such a high-level visit must have been planned long before. The timing could be a coincidence. It may be more possible that India temporarily decided to carry out high-level visits to Nepal right after it learned about China's relevant arrangements.

India, which regards South Asia as its own sphere of influence, has been highly vigilant against the region's cooperation with China. It has made use of media reports to manipulate local people's public opinions. These include spreading rumors about the so-called China threat theory and that China is "slowly invading" other countries. This has lamentably influenced other countries' foreign policies.

Indian politicians maintain close personal ties with political figures in its neighboring countries. Due to the long-term British colonial rule, India and other South Asian countries have formed inextricable relations in politics, economics, culture and religion. New Delhi has been utilizing these ties to influence its neighbors' politics and societies.

In the 2015 Sri Lanka presidential election, the country's long-time leader Mahinda Rajapaksa was winning at the beginning. But due to the maneuver of Indian intelligence services, Rajapaksa suffered a shock election defeat overnight. This can prove how much influence India has over regional countries.

Some South Asian countries attempt to escape India's deep influence. But in the meantime, they dare not offend New Delhi. Former Nepalese prime minister Pushpa Kamal Dahal made his first official visit to China in 2008 after assuming office, breaking a tradition of new Nepali leaders making New Delhi their first foreign port of call. But not long after that visit, he was toppled by India. Then Sri Lankan president Mahinda Rajapaksa once described India as his relative and China as a friend, implying that Sri Lanka was closer to India than to China.

In South Asia, New Delhi is a hegemonic force that keeps small countries frightened. But such domineering behaviors are bound to encounter a dead end. As South Asian countries began to deepen their cooperation with China and as they have more realistic considerations on their interests, India's moves in the region are being tested. Naravane's visit to Nepal was a vivid example that the Indian government will continue prior policies of putting neighboring countries under its thumb.

The author is secretary-general of the Research Center for China-South Asia Cooperation at Shanghai Institutes for International Studies, a visiting fellow of the Chongyang Institute for Financial Studies, Renmin University of China and a distinguished fellow of the China (Kunming) South Asia & Southeast Asia Institute. opinion@globaltimes.com.cn