Who is behind the fabricated reports provoking Nepal against China? 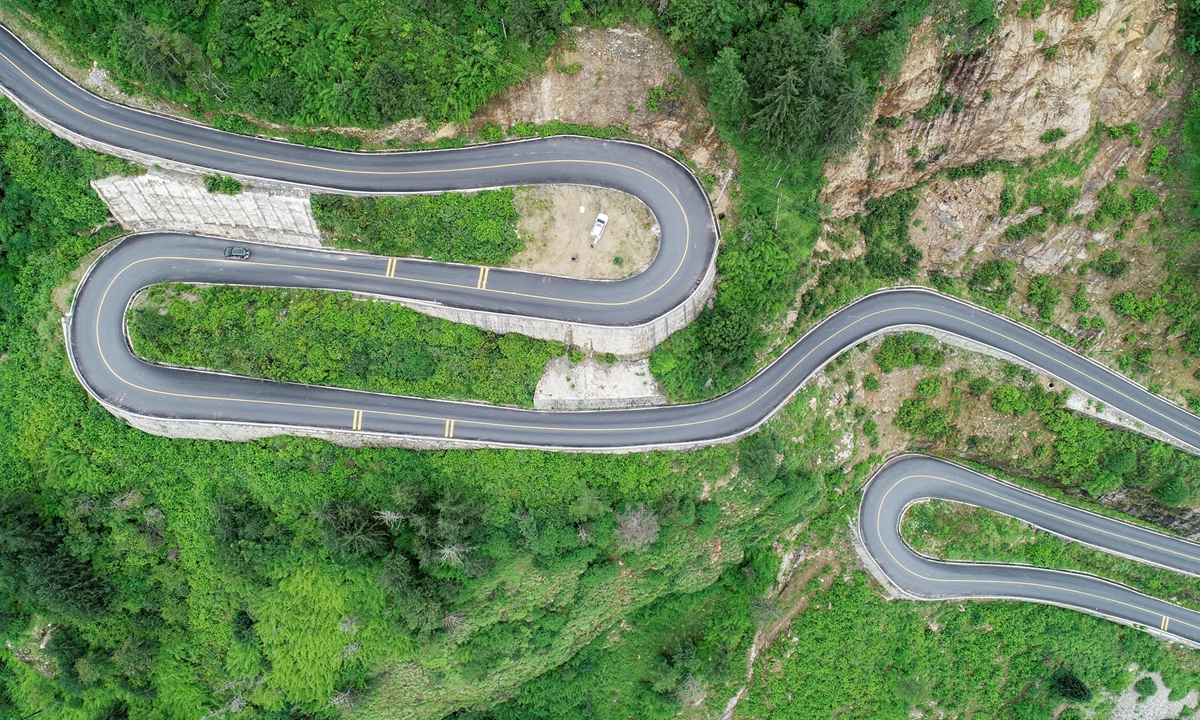 A section of road in China's Tibet Autonomous Region leading to Nepal Photo: Xinhua
Some recent Western reports, citing anonymous Nepalese politicians, groundlessly said Chinese military had crossed the China-Nepal border into the district of Humla and moved the stone pillars used to demarcate the boundary into Nepalese territory for China to construct military bases.
Nepali Congress, a political party in Nepal widely tagged as a pro-India force, was considered the main institution behind the rumors.

Nepali Congress lawmaker of Karnali Province, Jeevan Bahadur Shahi, also a former minister for culture, tourism and civil aviation who had previously been trained as a pilot at a US-based aviation school, initiated the accusation against China, Pushpa Raj Pradhan, editor-in-chief of the Nepalese media People's Review Weekly, told the Global Times.

A team led by Jeevan Bahadur Shahi that returned from an 11-day visit to Nepal-China border in Humla district in October accused China of encroaching on Nepal's territory in the district, local media reported. Many Nepalese criticized him for "blind support" of the US and following the direction of some in India.

"Shahi's reports were found malicious and wrong when later a team comprising of security agencies found both No.11 and No.12 pillars in their proper sites," Yogeshwar Ktm Man, a former officer of Nepal Police Service, told the Global Times. Yogeshwar Ktm Man noticed that Western and Indian media actively spread the misrepresented news which has been proven "baseless and malicious," amid the background that more Western and Indian political forces are attempting to turn Nepal as a "center of geopolitical interest which targets China."

Nepalese intellectuals expressed suspicion about the increasing Western activities in Nepal, considering many foreign NGOs are still operating throughout the country and behind some armed rebellion political movements, said Yogeshwar Ktm Man. He said some Indian television channels "were running news against Nepal's sovereignty and spreading concocted news about Nepal and China." He is worried some news reporters and politicians have been working as paid agents of India.


Karchen Lama (fifth from right) and his team visit the No.12 pillar at the China-Nepal border on November 4. Photo: Courtesy of Karchen Lama

"Some local media are under pro-Indian forces' control and they are able to spread such reports easily with highlighted cover news. They provoke Nepalese by saying China will capture Mt. Everest (Mount Qomolangma) someday. They are working to raise enmity between Nepalese and Chinese and they are moving ahead continuously on their mission," Karchen Lama told the Global Times.

"Some Indian political forces are afraid of gradually losing control in Nepal, since Nepal is the part of China-proposed Belt and Road Initiative project and will be connected with China through better roads and rail links. In the future, Nepal will not be an India-locked country. So, self-reliant Nepal is seen a problem for India," Yogeshwar Ktm Man argued.

Such kind of misrepresentations like the border pillar rumors by some Indians and Westerners with political intentions against China began five years ago and have continued to be hyped up by the media in recent years, said Pushpa Raj Pradhan. The influence of Indians and Westerners in Nepal is aimed at disturbing China, he said.

Nepal is a small country with huge unseen foreign investments, where Westerners as well as Indians are active to make their stronghold here, local experts said.

"Some Indians want Nepal to be their protected state, whereas Westerners want to make their stronghold here to watch and conduct anti-China activities," Pushpa Raj Pradhan told the Global Times.