Obsession with non-alignment diverts Delhi's policy attention away from the urgent task of rapidly expanding India's national capabilities in partnership with like-minded partners. 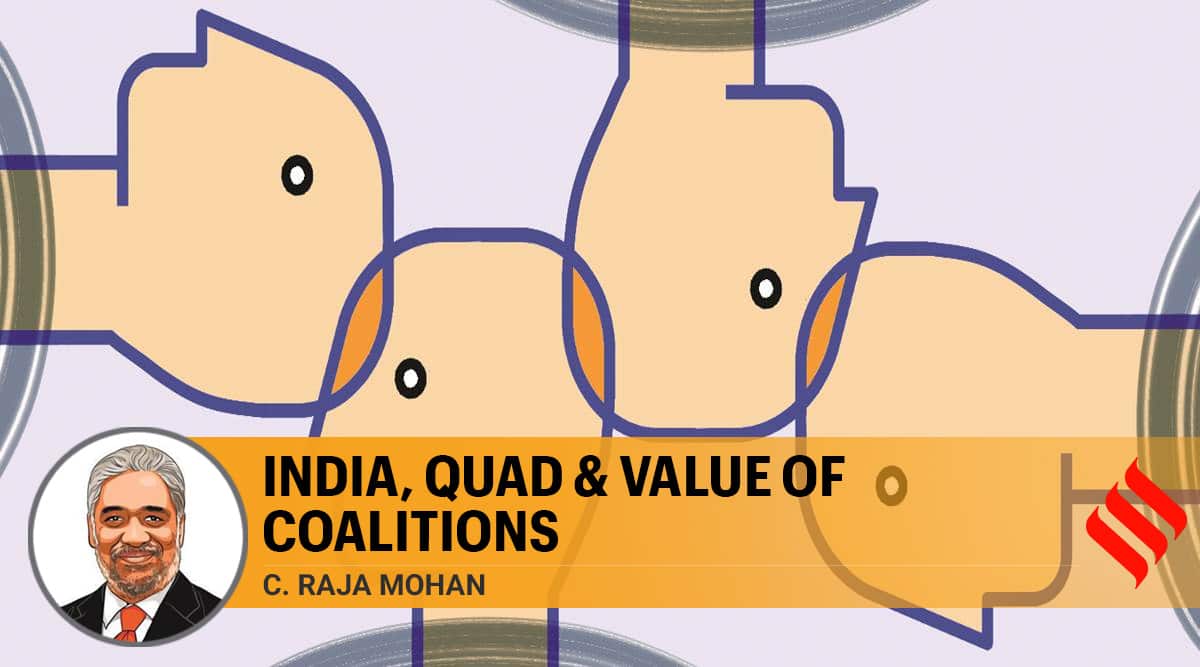 Unlike Communist China, a democratic India can’t be brutally transactional about its external partnerships.(Illustration by C R Sasikumar)

Few of Delhi’s bilateral relations get as much attention as its growing engagement with Washington and none of its many global groupings generate as much political heat as the so-called Quad — the quadrilateral framework that brings India together with the US and its Asian allies, Japan and Australia.

The Quad, whose foreign ministers are meeting today in Tokyo could certainly emerge, at some point in the future, as a critical element not only for India’s foreign and security policy but also a definitive moment in the evolution of post-War Asian economic and security architectures.

Meanwhile, confusion reigns on what the Quad is and its future in India’s international relations. Sustaining that confusion is the proposition that India is abandoning its “sacred” tradition of non-alignment in favour of a military alliance with the US in order to counter the China threat. Although External Affairs Minister S Jaishankar affirmed that India will not join any alliance, the chatter on India’s impending alliance has acquired a life of its own. One way of clearing that confusion is to ask four questions.

The first question is about the nature of alliances. Although they have a negative connotation in our foreign policy discourse, alliances are very much part of statecraft and as old as war and peace. They are a means to enhance one’s power. They are about deterring or defeating one’s adversaries. They involve written (in a treaty) commitments to come to the defence of the other against a third party. Beyond the pure version, alliances come in multiple shapes and forms — they could be bilateral or multilateral, formal or informal and for the long-term or near term. How they work varies according to the distribution of power within the members of an alliance and the changing nature of the external threat.

Alliances figure prominently in India’s ancient strategic wisdom embodied in the Mahabharata, the Panchatantra and the Arthashastra. Contemporary Indian domestic politics is always about making and unmaking alliances — between different castes and communities. Yet, when it comes to India’s foreign policy, alliances are seen as a taboo.

Part of the problem is that India’s image of alliances is frozen in the moment when India became independent. As the Western powers — the US, UK, and France — that joined Soviet Russia to defeat fascist Germany turned against Moscow after the Second World War, a newly-independent India did not want to be tied down by alliances. That notion is seen as central to Indian worldview. However, Indian diplomatic practice, as everywhere else, is different from the declared canon.

That brings us to the second question. Does India forge alliances? Contrary to conventional wisdom, India has experimented with alliances of different kinds. Let us start with the Indian nationalist movement. During the First World War, some nationalists aligned with Imperial Germany to set up the first Indian government-in-exile in Kabul. In the Second World War, Subhas Chandra Bose joined forces with Imperial Japan to set up a provisional government in Port Blair, Andaman Islands.

Jawaharlal Nehru, who unveiled the policy of non-alignment among the great powers, did not rule out alliances in a different context. When the three Himalayan Kingdoms — Bhutan, Nepal and Sikkim — turned to Delhi for protection amidst Maoist China’s advance into Tibet during 1949-50, Nehru signed security treaties with them. Nehru, who actively opposed US alliances in Asia, turned to the US for military support to cope with the Chinese aggression in 1962. Delhi desperately sought, but did not get, security guarantees from the US, UK and Soviet Russia after China tested its first nuclear weapon in 1964.

Indira Gandhi signed a security cooperation agreement with the Soviet Union in 1971 to cope with the crisis in East Pakistan. Then, as now, there was much anxiety in Delhi about India abandoning non-alignment. India also signed a similar treaty of friendship with the newly-liberated Bangladesh in 1972.

India does do alliances but the question is when, under what conditions and on what terms.

That brings us to the third question. Is the US offering India an alliance against China? To be sure, US Deputy Secretary of State Stephen Beigun recently mused about the Quad turning into some kind of an alliance in the future. But one speech does not an alliance make. In fact, the current political discourse in Washington is hostile to alliance-making.

President Donald Trump does not miss an opportunity to trash US alliances. His Democratic rival, Joe Biden, talks of strengthening US alliances, but there is no promise to build new ones.

In any case, formal commitments do not always translate into reality during times of war. Pakistan, for example, thought its 1954 bilateral security agreement with the US was about dealing with India. For the US, it was about countering communist aggression. Pakistan was deeply disappointed that the US did not prevent its division by India in 1971. Even within the long-standing US military alliances with Japan and the Philippines, there is much legal quibbling over what exactly is the US’s obligation against, say, Chinese aggression.

If you filter out the noise on the Quad, it is quite clear that Washington is not offering a military alliance. Nor is Delhi asking for one because it knows India has to fight its own wars. Both countries, however, are interested in building issue-based coalitions in pursuit of shared interests.

The fourth question is about the instrumental nature of alliances. Agreements for security cooperation are made in a specific context and against a particular threat. When those circumstances change, security treaties are not worth the paper they are written. Consider India’s security treaties with Nepal, Bangladesh and Russia. The 1950 Treaty was designed to protect Nepal against the Chinese threat. But large sections of the political elite in Kathmandu no longer see a danger from its north. Worse still, Nepali communists have long argued that the Treaty is a symbol of Indian hegemony. India’s 1972 security treaty with Bangladesh did not survive the 1975 assassination of the nation’s founder, Mujibur Rahman.

India’s own enthusiasm for the 1971 treaty with Moscow waned within a decade, as Delhi sought to improve relations with Beijing and Washington. Russia was willing to support India against the China challenge in the 1970s. But today, Beijing is Moscow’s strongest international partner — a reality that has a bearing on India’s strategic partnership with Russia.

No country is more instrumental about alliances as China. Chairman Mao aligned with the Soviet Union after the establishment of the People’s Republic in 1949 and fought the Korean War against the US during 1950-53. He broke from Russia in the early 1960s and moved closer to the US in the 1970s.

Mao, who denounced US alliances in Asia, was happy to justify them if they were directed at Russia that he saw as a greater threat to China. He also welcomed Washington’s alliance with Tokyo as a useful means to prevent the return of Japanese nationalism and militarism. Having gained immensely from the partnership with the US over the last four decades, China is trying to push America out of Asia and establish its own regional primacy.

Unlike Communist China, a democratic India can’t be brutally transactional about its external partnerships. But Delhi could certainly learn from Beijing in not letting the theological debates about alliances cloud its judgements about the extraordinary economic and security challenges India confronts today. The infructuous obsession with non-alignment diverts Delhi’s policy attention away from the urgent task of rapidly expanding India’s national capabilities in partnership with like-minded partners. An India that puts its interests above the doctrine will find coalitions like the Quad critical for its international prospects.

This article first appeared in the print edition on October 6, 2020 under the title “India, Quad & value of coalitions”. The writer is director, Institute of South Asian Studies, National University of Singapore and contributing editor on international affairs for The Indian Express