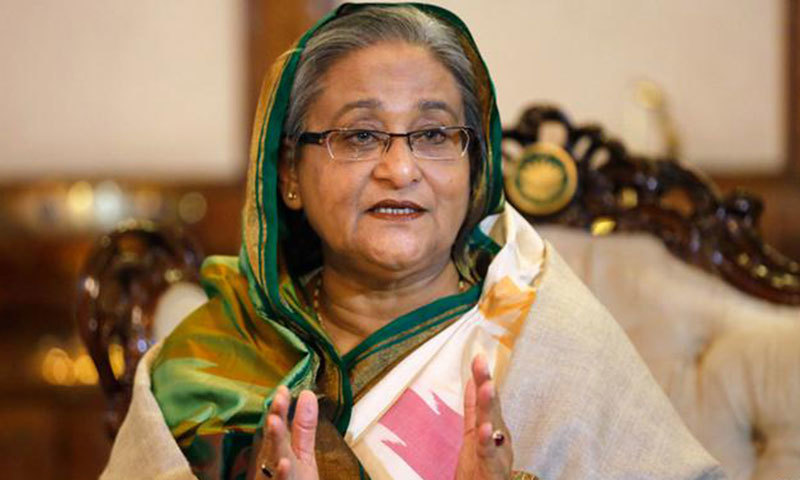 The comments about the state of bilateral ties are timely as Hasina Hasina received a phone call from Prime Minister Khan on Wednesday. — Photo courtesy Reuters/File

NEW DELHI: A prominent newspaper of Bangladesh has said Prime Minister Sheikh Hasina did not meet India’s high commissioner despite repeated requests for a meeting in the last four months, one of several signs of strained relations with New Delhi and a shift for closer ties with Pakistan and China.

The Hindu on Saturday quoted Bhorer Kagoj, a prominent daily, as reporting that all Indian projects have slowed down since the re-election of Prime Minister Hasina in 2019 with Chinese infrastructure projects receiving more support from Dhaka.

“Despite India’s concern, Bangla­desh has given the contract of building an airport terminal in Sylhet to a Chi­nese company. Indian High Commi­ssioner Riva Ganguly Das tried for four months to get an appointment with the prime minister of Bangladesh but did not get it. Bangladesh has not even sent a note of appreciation to India in response to Indian assistance for the Covid-19 pandemic,” said the newspaper’s editor Shyamal Dutta in an article.

The Hindu said it showed a recent tilt of Dhaka towards Pakistan and China. A similar move was recorded in Iran recently, which has decided to go ahead without India in a Chabahar Port railway project that the two countries had agreed to undertake together.

The Bangla paper said the Beijing Urban Construction Group (BUCG) has received the contract for building a new terminal in MAG Osmania Airport of Sylhet that borders India’s northeastern region and is, therefore, considered a sensitive area for New Delhi.

A diplomatic source from the Bangladesh High Commission here confirmed to The Hindu that the Indian envoy had sought an appointment with Ms Hasina but it did not materialise. However, neither India’s High Commission in Dhaka nor the Ministry of External Affairs responded to questions from the paper.

A diplomat from the Indian mission said Ms Ganguly Das has gone out of Dhaka on a tour.

The comments about the state of bilateral ties are timely as Ms Hasina received a phone call from Prime Minister Khan on Wednesday.

Though Dhaka refused to give details of the conversation between the two leaders, Pakistan’s official news agency reported that Mr Khan informed Ms Hasina about the situation in occupied Kashmir and sought “resolution” of the dispute.

India, in response on Thursday, appreciated Bangladesh saying that Dhaka considers Kashmir an internal matter of India, The Hindu said.