What if Carrie Lam united protesters against Beijing on purpose?

As the US wakes up to China’s ambition, expect an epic arms race

What next for the US dollar after a bumpy 2019?

This Week in Asia

A defiant HK and a slowing economy, but Xi’s long game is certain

Never mind Hong Kong’s revolution, the world is about to go to war

In US-China tussle for the best brains, Beijing must not rest easy 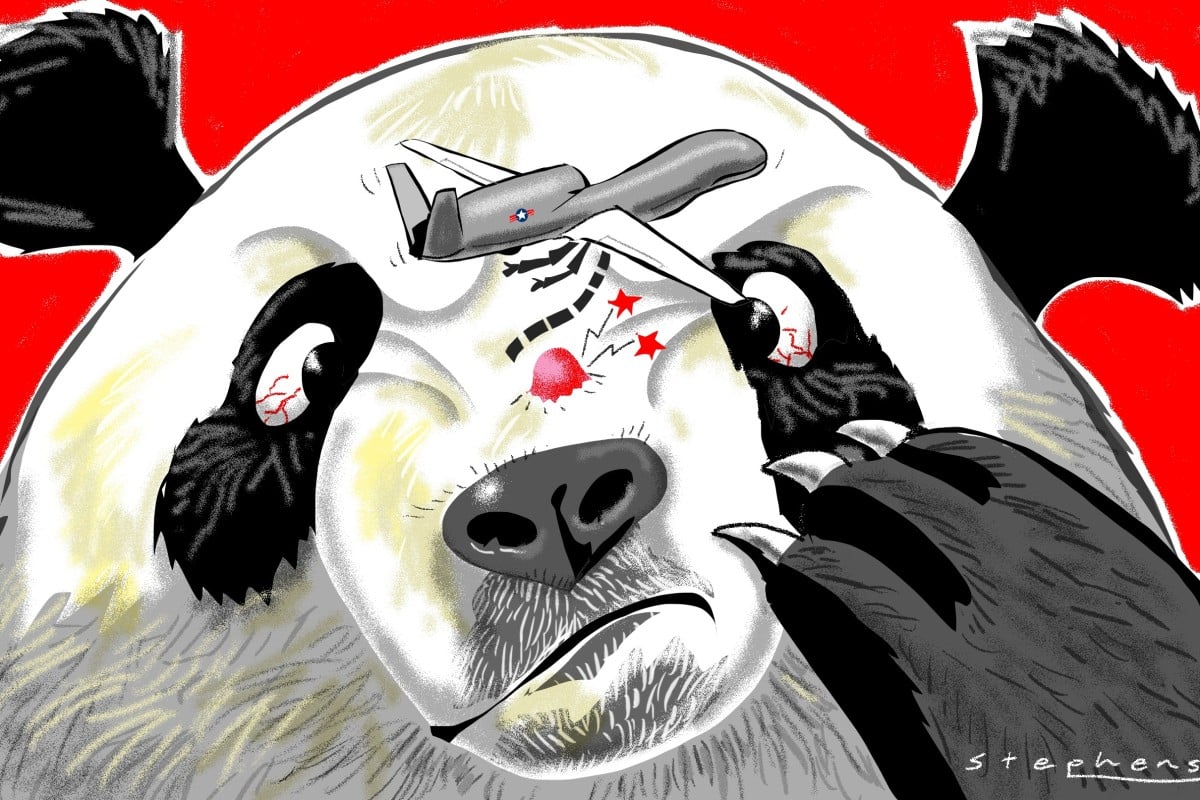 Illustration: Craig Stephens
The
assassination
of
Iranian major-general Qassem Soleimani
by the United States may be explained by US President Donald Trump’s administration as a retaliation against and deterrence of
Iranian aggression
but, in reality, it may actually be a strategic provocation against China. To understand why this is the case and see how this particular action is merely one piece of a larger puzzle, one must take into account all of America’s foreign policy actions.
Since the end of World War II, US foreign policy has been obsessed with how to maintain the nation’s superpower status. It maintains strong alliances like
Nato
and a military presence in virtually all corners of the planet as part of that strategy.

Over the years, influential policymakers such as Zbigniew Brzezinski have argued that the US must go further to ensure supremacy. For some, this includes designating Iran, Russia and China as enemies because the US doesn’t have total control over these countries, and stirring up Islamic extremism because all three of these countries have large Muslim populations that can be turned into terrorists against their own countries.

By creating Islamic extremism in these territories, the home-grown Muslim terrorists could then battle these foreign governments on behalf of the US, thus reducing the need to sacrifice American soldiers.

As a result, such proxy wars have become a permanent fixture on the world stage. The
invasion of Iraq
, the
civil war
in Syria, the bombing of Libya and many other actions have created extremist groups such as
Islamic State
that are direct threats to Iran, Russia and even China. 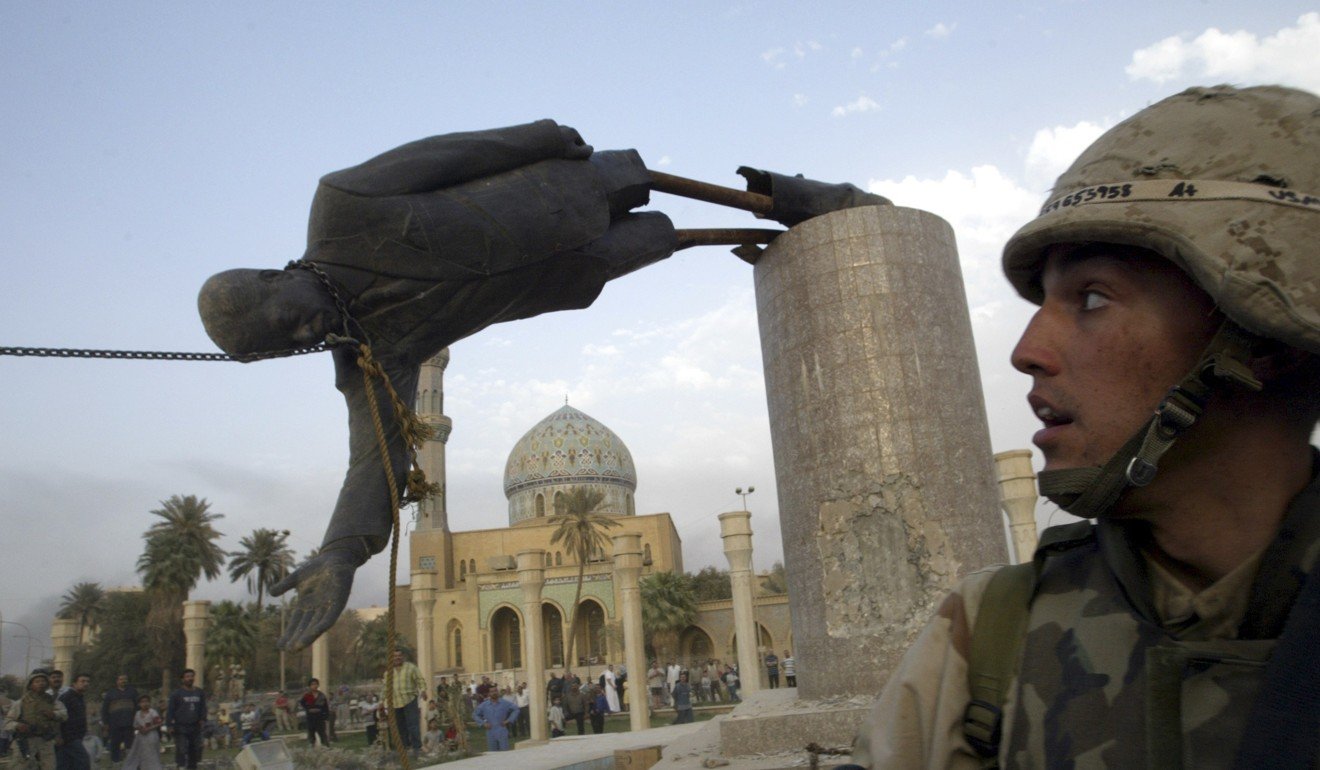 A US Marine watches as a statue of Iraq’s president Saddam Hussein falls in central Baghdad on April 9, 2003. The US invasion of Iraq set off a series of events that plunged the region into conflict and can be tied to the rise of extremist groups such as Islamic State. Photo: Reuters
In the case of China, Uygur groups from the Muslim minority in China’s northwest, were armed with military weapons by outside forces. Uygur separatists proceeded to terrorise parts of Western China with
bombings
,
stabbings
and other
violent means
which have been widely reported by Western news agencies such as the BBC.
The Chinese government has responded with an internment camp for
1 million Uygurs
to try to stem the violence and to prevent a civil war like in Syria from breaking out. But such moves have been met predictably with
threats and hostility
from the US, which would much rather see conflict in China.
The US has made it publicly clear that it regards China as a “
strategic competitor
”, which is a polite label for enemy. The US has been actively trying to provoke China into a military confrontation since 2013 under the
Obama administration
by suddenly turning the South China and East China seas into hotspots after decades of peace in the region.
US-China ‘clash of civilisations’ is a plain old power struggle

Since Chinese President Xi Jinping has not taken the bait on that front, the Trump administration has tried to bait China by stirring up more trouble using
Taiwan
,
North Korea
and Xinjiang. US actions related to
Hong Kong
are consistent with this strategy.
Finally, the
US-China trade deal
notwithstanding, the US has been openly discriminating against Chinese across its economy. From blocking
Chinese investments
in US companies and
restricting
American hi-tech suppliers from doing business with Chinese companies such as Huawei, to accusing Chinese students and
scientists
of being spies, the US has made it no secret that China is its top target.
How does Soleimani fit into this picture? China has been a major importer of
Iranian oil
. China is also part of the
Shanghai Cooperation Organisation
, which makes it a close partner of Russia.
SUBSCRIBE SCMP TODAY:  OPINION
Get updates direct to your inbox
By registering, you agree to our T&C and Privacy Policy
Since the US has not had great success in provoking China into a military confrontation in the other theatres, it is very likely that it intends to drag China into a war through another country in the same way that Germany was drawn into World War I after
the assassination
of the Austro-Hungarian empire’s Archduke Franz Ferdinand.

It was no coincidence that Google searches for “Franz Ferdinand” spiked minutes after Soleimani’s assassination, and the vast majority of those searches came from Washington. 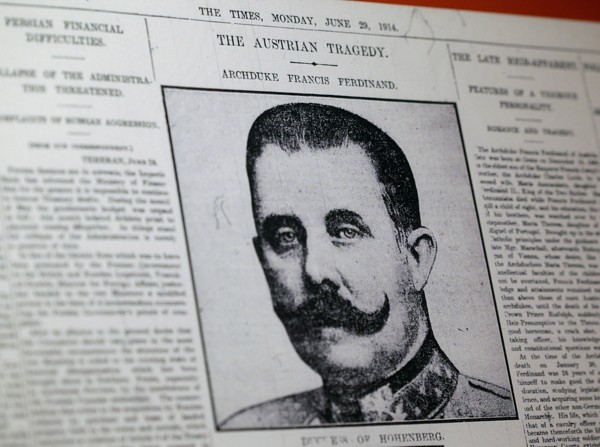 This April 4, 2014, photo shows a reproduction of a London newspaper front page from 1914, which writes about the assassination of Archduke Franz Ferdinand, on display at the National World War I Museum in Kansas City in the US. Photo: AP
Naturally, China has been
urging calm
because if Iran escalates things with military retaliation, it could then drag Russia into a conflagration that China would be unable to avoid. China has no interest in being dragged into a war because it knows that when there is chaos and instability in the world, economic growth is the casualty.

China’s economic growth relies on a stable global environment. The US, on the other hand, would prefer chaos in the world because this allows it to remain the sole superpower.

While the US has been openly hostile towards Iran and Russia, China is America’s real prize since neither Iran nor Russia could displace the US as a superpower in the foreseeable future. All the war games in the Pentagon have been against China, not Iran or Russia.

As the US wakes up to China’s ambition, expect an epic arms race

Without designating China as a “peer competitor”, the US military couldn’t justify its
ever-increasing military budgets
. After all, if China is not a “threat”, the military-industrial complex would be severely downsized.

China is the only country that could soon displace the US as the largest economic power, which often means that political power will follow. Seen from this framework, Trump’s move is a carefully calculated provocation of China, one that brings us closer to breaking the camel’s back.

Ann Lee is an internationally recognised leading authority on China’s economic relations and author of What the US Can Learn from China, and Will China’s Economy Collapse? She is also a former visiting professor at Peking University and an adjunct professor at New York University and Pace University, where she taught macroeconomics and financial derivatives

for our 50% early bird offer from SCMP Research: China AI Report. The all new SCMP China AI Report gives you exclusive first-hand insights and analysis into the latest industry developments, and actionable and objective intelligence about China AI that you should be equipped with.