Indian Journalist Sunaina Mullick writes October 30/19 that a study conducted by IIT-H (Indian Institute of Technology, Hyderabad) reveals that the Indians have a smaller Brain compared to the rest of the world.Fitting revelation that it is-better late than never.This million dollar “exposé” has come at a time when the Indian nation should have known this about themselves much earlier. Yet it is not too late.

Thus this news assumes greater significance in the current context when each day beginning August 5, India is getting ‘uncovered’ among the comity of nations for its Himalayan blunder in having teased and challenged the Kashmiri population-patience and longing-a population that had been awaiting the conduct of the promised UN plebiscite for the determination of their fate since seven decades or so.

Pundit Nehru had Okayed the UN mediation and Mahatma Gandhi too had said that “if the population prefer India or even Pakistan they should then be allowed to select the country of their choice”.

However, later the Indian republic born 1947 backed out from its earlier commitments.

Even Pundit Nehru and his descendants (Mrs. Indira Gandhi and Rajiv Gandhi) too toed the same line which meant that the Kashmiris were told to wait ad infinitum to get their dreams come true.

Notably, UN has made several resolutions in the past on Kashmir.

These resolutions apart, there is the prevalence of the Shimla accord which too has been ignored by the Indian establishment while scrapping the special status of the Indian administered Kashmir.

Julfikar Ali Bhutto and Smt. Indira Gandhi has signed the aforementioned accord in Shimla.

This scrapping of the Article 370 in effect has detached the Indian Union with India controlled Kashmir.

Article 370 was more or less a link in between the people of Kashmir with the Indian Union.

The Kashmiri lockdown more or less continues since August 5 even as of today.

The most hard hit are the Kashmiri children who have since August 5, not attended their schools. The entire Kashmir valley has a deserted look since August 5/19.

As regards the high handedness of the Indian Army in Kashmir valley Ms. Jackson Lee (US) says “I believe this is a moment in time of history the USA must intervene to stop a potential genocide in Kashmir. This is the right time”.

Indian analyst Sadanand Dhumey writes quoting Akar Patel, October 27/19 that “This months (October 2019) congressional hearings in Washington “expose a fundamental hypocrisy about this new India of ours. We want to screw over our minorities but also want to retain our image as a tolerant and peaceful”.

Her comments came close on the heels when reports appeared in a section of the international press that “the traumatizing incident of Kunan Poshpora where close to 100 women were raped in one (single) night by the patrolling Indian forces.

The US apparently has remained tight lipped and prefers not to press the Indian establishment to ease the imposed restrictions on Kashmir.
Tension remains in the valley.

The rest of the population have since then (August 5, 2019) been denied of their fundamental rights to the extent that the former Chief Ministers of Kashmir too have been house arrested.
This explains the functioning of the largest democracy?

Isn’t it a mobocracy?

The fieriest attack came to India by none less than from the President Erdogen of Turkey who while addressing the UN general assembly in September lambasted at India and said that the regime had committed atrocities on the Kashmiri Muslim population which need to be eased at the earliest. The Turkish President wanted the restrictions to be eased.

To add insult to injury, President Erdogen sharp criticism made on Indian barbarism as regards the Kashmiri lockdown was very powerfully endorsed by the most senior leader in the contemporary world- the Malaysian Prime Minister Dr. Mahathir Mohammad who took even the risk of the expected Indian wrath. But he censured India on Kashmir lockdown.

India as a retaliatory measure, has banned the Palm Oli import from Malaysia. Thanks no economic blockade on Malaysia.

The Malaysian Prime Minister remains undeterred as of now.

The news that the Indians possess smaller brains (as compared to its elephantine size?) must have consoled all those political personalities and the countries who primarily differ sharply with the Indian action on Kashmir.

The Nepali people are against the Indian action on Kashmir, however, the protectorate sort of Nepal Government apparently takes the Kashmir issue as an issue internal to the Indian Union to which it is definitely not.

Kashmir is a disputed territory.

To recall, the Pakistan’s Military man Pervez Musarraf while talking to one Indian TV Channel (Most likely the Military general was talking to news anchor Rahul Kanwal) had bluntly said that “Indians have small heart as compared to its elephantine size”.

And now the Indian scientist has tentatively proved that the Indians really possess smaller brains.

That the Indians have smaller brains have been divulged by Professor/Scientist Mrs. Jayanthi Sivaswamy who made these somewhat India disturbing statement while granting an exclusive interview to the Times of India recently.

Notably, Professor Jayanthi Sivaswamy is from the Centre of Visual Information Technology,

She further says that even the Chinese and Korean templates were created as well but nothing matched the India-specific population.

She goes on to say “That’s why a team was specially assembled to create India’s first ever brain-atlas, specific to Indian origins and genes. The team consisted of 50 individuals and was gender neutral”.

So this perhaps put to rest the general self-pleasing impression among the Indian nationals that they were the most capable and knowledgeable person in the world which has summarily been dismissed by an Indian scientist Professor Jayanthi.

Now it is the turn of the German Chancellor Angela Merkel to speak something on Kashmir lockdown.

And here she blasts at the Indian establishment while being in Delhi itself as a guest.

German Chancellor Angela was in India on an official visit wherein the chancellor ( she is a physics professor from the Eastern part of Germany) raised the Kashmir difficulty throughout her talks with Prime Minister Narendra Modi last Friday night, and conveyed that the “situation for the people in Kashmir is unsustainable and not good”, in keeping with German journalists accompanying her, writes Darius Booding, November 2, 2019 who is also accompanying the Chancellor in Delhi.

Michaela Kuefner, the Chief Political Editor at DW, Germany’s worldwide TV channel, tweeted that in a “modest pre-dinner criticism of the Kashmir clampdown, Merkel said that “the State of affairs for the individuals there may be unsustainable and never good”.

"Not sustainable and not good": German Chancellor Angela Merkel criticized New Delhi's clampdown in Kashmir during her visit to India. 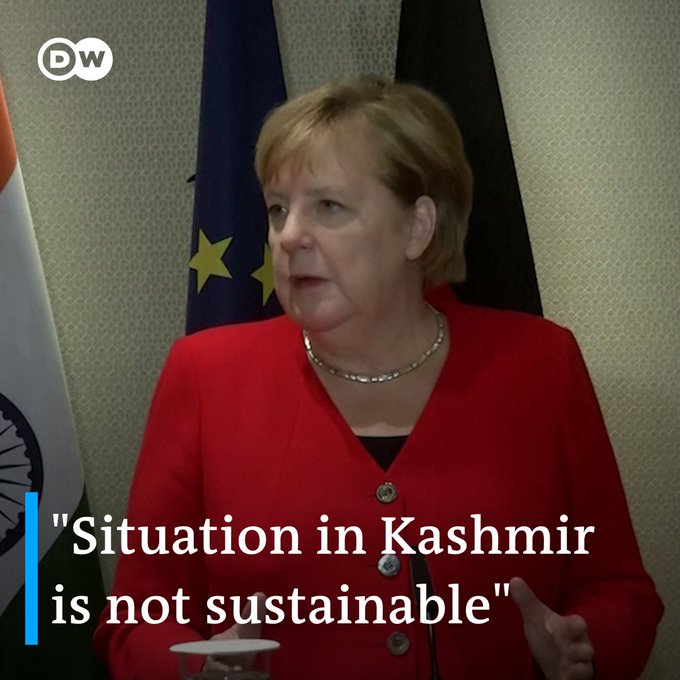 4,741 people are talking about this

Merkel met Modi for a second spherical of talks at his 7, Lok Kalyan Marg, official residence, adds Darius Booding for the LIIST Studio.
Quite interesting is the fact that ahead of the visit of the German Chancellor a group of largely right-wing European parliamentarians (MEPs) had visited Indian-administered Kashmir, prompting outrage from local politicians who have not been allowed to go.

The visit has been criticized as nothing more than a PR stunt of the Himalayan dimension.

Some even in India itself have dubbed the visit of the Europeean Parliamentarians as a “Guided Tour-Kashmir”.
This was the first international delegation to visit the region since August, when India’s ruling Hindu nationalist Bharatiya Janata Party (BJP) stripped the state of its autonomy, splitting it into two federally run territories and locking it down for weeks.

The EU delegation initially comprised 27 members from countries including the UK, Spain, Germany, France, Italy and Poland – although four decided not to visit what has been India’s only Muslim majority state and returned to their home countries.

In the meanwhile, the British Prime Minister Boris Johnson has stressed that it is for India and Pakistan to find a lasting solution to the Kashmir issue in accordance with the wishes of the Kashmiri people.

Reiterating the UK government’s stand on Kashmir, Johnson described both India and Pakistan as “important partners to the UK” in a letter dated as back as September 6 in response to a letter written last month by Conservative Party MP Bob Blackman.

On October 30, as reported by the Times of India the British Prime Minister Boris Johnson (Wednesday) said in the British Parliament that the UK’s long standing stance of Kashmir being a bilateral issue between India and Pakistan remains unchanged although the situation in the valley is of “profound” concern to the country.

For the Road: One European Union MP was allegedly uninvited from visiting Kashmir after he expressed the desire to “travel freely, unaccompanied”.
Chris Davies, Member of the European Parliament for North West England, was a part of the group of EU MPs who were invited to visit Kashmir to see the situation on the ground.

Chris Davies is the hero for having boycotted the Guided Trip to Kashmir. That’s all.