N.P. Upadhyaya: China, frankly speaking has made greater inroads in Nepal over these years.

The non-ending Indian coercive policy towards Nepal compelled the later to inch closer to the Northern mighty neighbor-China.

Since China has come, it will remain for long time to come.

China’s stay here in Nepal is a must in order to balance “tilted” neighborly ties.

China’s longer stay in Nepal may have caused immense pain to some domestic tilted literati, however, the fact is that China entered Nepal more or less on Nepali populations’ fervent appeal and requests.

The Indian inhumane blockade of the year 2015 came as an opportune moment for Northern neighbor China to make its penetration in Nepal and the then Nepal Prime Minister KP Oli himself flew to Beijing to facilitate China’s entrance in Nepal.

Since then China has gradually increased its political as well as economic strength in Nepal.

But then this should not mean that PM Oli has affection for China up to the brim. Not at all. President Xi and Foreign Minister Wang Yi must not have any illusions.

(The Nepali people understand their leaders better and they also know as to which force on earth makes our leaders to swing the 12 point way).

It is this Hospital in Delhi which remained instrumental in the treatment of his ailing Kidneys.
(Strong rumors claim that PM Oli had fresh dialysis at the Grande Hospital in Kathmandu. The entire affair has been kept a secret).

Similarly, for Prachanda the Delhi hospitality is very near and dear to him or else his India sponsored War would not have come to an end as desired by father Saran and Prachanda.

But yet with China’s arrival in Nepal, people now love to hate India for a variety of political reasons.

Most importantly, two factors distinguish India from China at least in Nepal.

First, if India talks too much and makes tall promises, then China talks less and acts as per its promise. 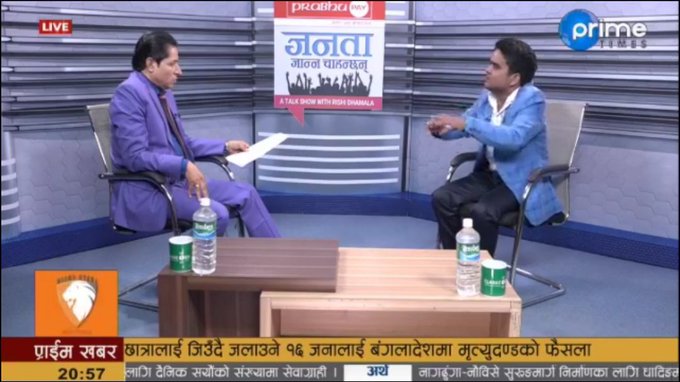 Once incident pertaining to Nepal-India relations would not be irrelevant in recalling for the larger interest of the readers both within and without.

A single instance. India gifted one Military helicopter to Nepal when Sushil Koirala was Prime Minister.

The flying machine, as was disseminated in the Godi media both in India and Nepal, was the token of love and honor to Nepal government from the government of India.

Hardly some months of the gift ceremony had gone by, Nepal government received a hefty bill to be paid by the Nepal government for the purchase of the Helicopter which, let’s recall, had been gifted by the friend across the border.

Observers presume that Nepal must have paid the bulky bill from the Indian government.

This is just a single instance.

Despite the existence of such a bitter reality in Nepal-India ties, yet our relations are “excellent” and “irreplaceable” in the eyes of some myopic intellectuals who for reasons unknown to the observers, the universe begins and end with India.

Beyond India, the civilization doesn’t exist, this is what they presume. They are at fault.

So it is taken as tilt syndrome.

(By the way, India is struggling with the Manipur secession problem. Manipur officials have made a declaration in London that they were a separate Country).

It is this flock of highly qualified academicians (they are not perhaps) which even ignores the Blockade of the year 2015.

All these said and done, China understands that the final say in Nepal will that be of India’s because of the continued Indian domination which has been there since the very first days of the emergence of the Indian republic, 1947.

The domination in return is reciprocated by subservience.

Some intelligent brains in Nepal remain askance as to why the British India Company left for good the present day Indian republic?

President Xi visited Nepal October 12-13 and left Kathmandu with a fervent hope that Nepali authorities shall control the anti-China activities from the Nepali soil.

He was hoping against hope perhaps.

Bikash Thakur, an energetic youth from Nepal’s Terai bluntly asserts that present day rulers of communist Nepal in fact have been playing hide and seek game with China.

If the Nepali officials assure the Chinese authorities that Nepal remains committed to “one China policy”, however, in reality it is these Nepali rulers who have intimate ties with the representative of the Dalai Lama in Kathmandu.

Beijing knows this fact but pretends not to have sensed.

According to Mr. Thakur, not only the former Indian based/nourished Maoists leader Prachanda and the incumbent Prime Minister KP Oli but even the sitting President of the Republic Mrs. Bidya Devi Bhandari have tacit linkages with the Dalai representative in Kathmandu.

Thakur claims that these high flying Nepali leaders have been maintaining close contacts with the Dalai man in Kathmandu since 2013.

By the way, several Nepali Congress leaders also possess intimate links” with the man whom Beijing dislikes in Nepal.

To recall, during the Royal regime, the office of the Dalai Lama was told to pack up from Nepal.

However, Nepal has never failed in assuring China that she is committed to curb the anti-China elements and would not allow them to create troubles in bordering Tibet-China’s underbelly.

President Xi has made several agreements with Nepal which would be helpful in lessening Nepal’s high dependency on India.

Above all, the million dollar announcement made by China’s President Xi Jinping while being in Nepal is his blunt but ear pleasing assurance that Nepal no longer remains a landlocked country and that Nepal henceforth is a “land linked country”.

It is this statement that has unnerved the Indian establishment.

But yet, the final say shall be that of India as per the wishes of those domestic men for whom India is the beginning and the end as well.

A word to China: Prior to signing the agreements with Nepal hence forth, China would do well to insert a clause that restricts the other signatory i.e. Nepal government from selling the China gifted factories or for that matter any similar infrastructure(s).

Or else, chances shall remain for happening of the repetition of the previous acts that sold all the China gifted projects that included several factories.

Notably, the Nepali Congress government under (late) Girija Prasad Koirala made it a point after the so called change to see the entire China assisted projects as a dirt cheap price.

Finance Minister Mahesh Acharya (?) and his successors perhaps did everything to erase Chinese signature projects from the Nepali soil, it is highly rumored.

A Chinese Ambassador posted in Nepal had ventilated his pains, 2009 that the Nepal government had sold only those projects which had been gifted by China to the people of Nepal.

The Chinese envoy made this disclosure for the first time in Kathmandu at a program convened by Kishore Shrestha-the Chair of the Nepal-China media society that time in 2009-10.

Mr. Thakur made these observations while talking to a Nepali journalist Rishi Dhamala recently.

As the rumor had it, Mr. Thakur was arrested by Nepal government on charges that he was engaged in anti-China activities to which Mr. Thakur summarily denies.

“I only wrote in my Facebook status that Chinese hackers should be penalized who had hacked some Nepali Banks-ATM and that Nepali girls are being forced in the flesh trade in China these days.

“The police arrested me for having hinted the visiting Chinese President to look into these matters seriously, however, Nepal police arrested me concluding that I was acting against China which is not true”, claims Thakur. To sum up, China has reasons to suspect the political credentials of the ruling leaders, however, what is also advisable to the Chinese officials not to take a rigid stance on those whom Beijing alleges that they were engaged in anti-China activities from the Nepali soil.

Hardened stance of China will only benefit India for multiple reasons.

Compared to Hong Kong protests, anti-China acts in Nepal could be taken as insignificant. That’s all.