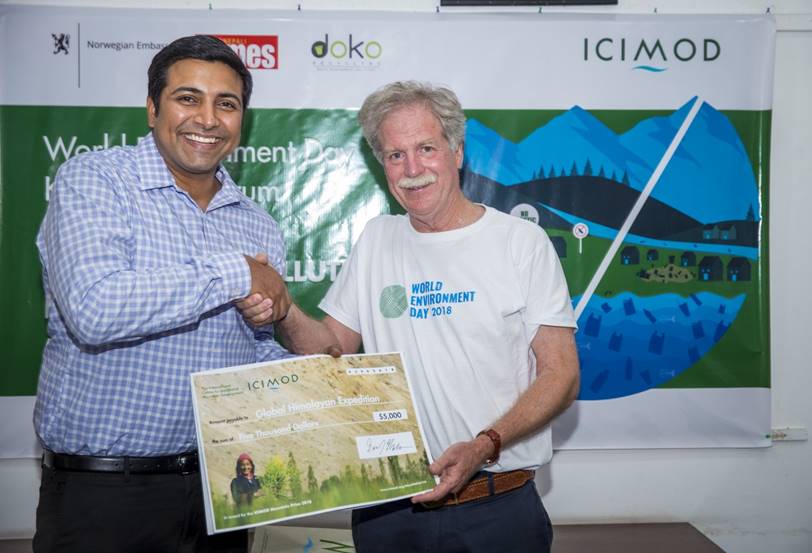 5 June 2018, Kathmandu: The ICIMOD Mountain Prize Commission today announced Global Himalayan Expedition (GHE) – facilitator of access to digital education and clean energy, and promoter of sustainable tourism in remote Himalayan communities of India – the winner of the ICIMOD Mountain Prize 2018. This is the first conferral of the prize, which will continue on an annual basis.

David Molden, Director General of the International Centre for Integrated Mountain Development (ICIMOD), handed over the ICIMOD Mountain Prize to Paras Loomba, Founder of GHE, amidst a function organized to celebrate World Environment Day in Kathmandu.

Molden said that ICIMOD is proud to recognize GHE for "its outstanding efforts enabling sustainable and resilient mountain development in the Hindu Kush Himalaya (HKH)".

The annual ICIMOD Mountain Prize was established recently to recognize significant efforts made by an individual and/or an institution to advance change for the mountain cause in the HKH through innovations in their various capacities.
GHE was selected as the winner from a pool of 30 nominees from the HKH and beyond for bringing about transformative change in the lives and livelihoods of remote mountain communities of Ladakh through the implementation of its unique community-centred impact-based development model. In a short span of time, GHE was able to:

GHE founder Paras Loomba noted that, “The recognition by ICIMOD is a big morale booster for our on-ground team to keep continuing their efforts towards sustainable mountain development with a key focus on the UN Sustainable Development Goals.”
Molden also announced the following six Honourable Mentions: