New Zealanders too often ignore the ugly side of Nepalese tourism

Porters, including Ganga on the left, carry an Australian trekker to a waiting rescue helicopter.

Nicholas Boyack has been a regular visitor to Nepal since 2008, trekking to some of the most remote parts of the country. There is, he says, an ugly side to Nepalese tourism – the exploitation of porters and the trafficking of children that New Zealanders too often ignore.

Trekking to Everest Base Camp is on just about everyone's bucket list.

For those who slog their way to the tent camp made famous by Sir Edmund Hillary, it is a lifetime highlight. 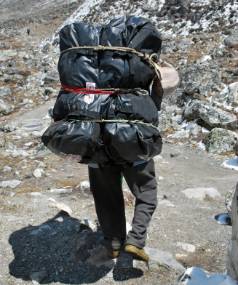 Another highlight is visiting Kathmandu with its throngs of shops selling cheap (usually fake) outdoor gear and Nepalese souvenirs.

Most people who trek to the camp or the other popular destinations, join organised treks.

READ MORE:
* China plans to build hotel on Mt Everest
* Nepal welcomes tourists after quake
* Trekking in Nepal will take your breath away 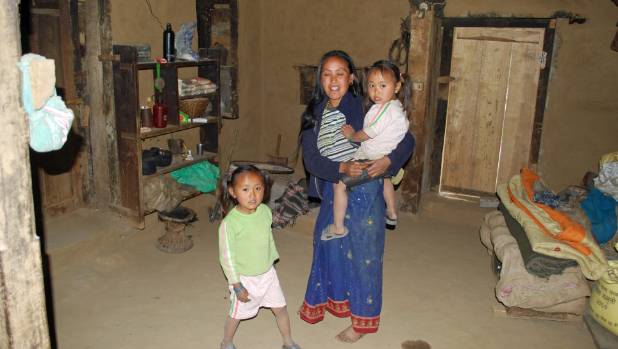 Amita and Ramita with their mother in her kitchen. They had never seen a car or a a TV, or been to Kathmandu

A typical group has eight to 10 foreigners supported by a leader, a couple of sirdars who organise the porters, and a group of porters.

A porter will carry anything between 30 and 90 kgs on a crude harness, often made from rice sacks, on their head.

My first experience of how tough the porters are came in 2008  when my partner and I joined a trek to EBC. 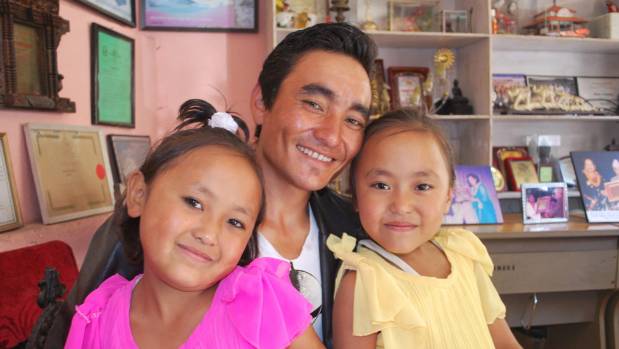 Amita and Ramita in school in Kathmandu with their father, Ujir.

An overweight and unfit Australian came down with attitude sickness. Fighting for his life as his lungs and brain filled with fluid, it was clear his only chance was to be evacuated immediately.

In the middle of the night  the porters put him in to a sleeping bag and tied him to a plastic chair. They then took turns, carrying him on their head, running downhill so a rescue helicopter could take him to Kathmandu.

Afterwards, all the clients grouped together and paid the porters for their life-saving gesture. 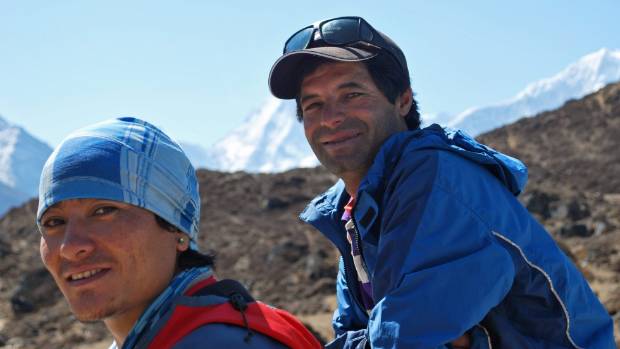 Ujir and Ganga work for trekking companies earning as little as US$5 a day.

It was to be the only organised trek we have done and in the years since, we have formed a strong friendship with three locals, Roy, Ganga and Ujir.

Paying them a fair wage we have visited areas that are well off the main routes.

Ujir carried our gear and as we got to know him, we began to understand his life story. 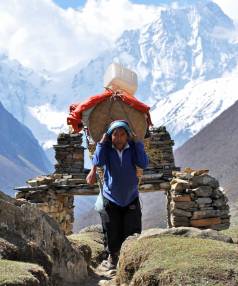 A porter carries a heavy load near Manaslu.

A slim,  wiry man with a wife and two children, his initial foray into portering was carrying rice to Lukla, where tourists begin their journey to EBC.

Although he weighs little more than 50 kilograms, he carried 100 kgs of rice.

Ujir lives in  Patle, a tiny village situated on the side of a steep ridge 150 km from Jiri, where Hillary began the 1953 expedition to climb Mt Everest.

His best friend is an older man called Ganga, who has been in the trekking business for many years, doing everything from cooking and portering to guiding.

The two are inseparable and it was Ganga that encouraged his friend to become a trekking porter.

They  are the unsung heroes of Nepal. A good porter can carry more than a yak and travel at a much faster pace.

By any standard Ujir is a top porter. He has the stamina of an Olympic marathon runner and the strength of an All Black prop.

Legally, porters are not supposed to carry more than 30kgs

Trekking firms like Ujir because he can do what is called "double" and "triple bag" which means the firms can keep costs down by employing fewer porters.

Each trekker is usually limited to 15 kgs. If a porter carries the gear for two people, he is carrying 30 kgs.

When Ujir carries three bags of 30kgs, he is carrying the gear for six people. He gets paid more to carry such loads and will do so happily but the impact on his health can only be guessed.

Porters earns between US5 and $US$12 a day from which they often have to pay for food and accommodation.

Nepal is one of the poorest countries on earth and there is no shortage of people like Ujir lining up for work.

In 2012  we made it to Patle  where villagers make a living growing vegetables, with the men supplementing their income by working in the trekking business.

We met Ujir's wife and two children, and were struck by just how little they had. The village relied on one hose for water, had limited electricity and few could speak English.

Ujir's wife had never seen a television or a car. His daughters, Amrita and Ramita, ran around semi naked and like the rest of the village used the vegetable patch for a toilet.

The school was a primitive affair, with a dirt floor and the locals rated it poorly.

His two daughters looked to have a grim future. Their only real hope was marrying a local farmer who would treat them well.

Ganga had a younger unmarried  sister  in her early 20s.  She was already too old to be married off and was relegated to looking after children and relying on relatives for food.

To have any chance of having a life outside the village, Amrita and Ramita needed to be educated.

Back in Kathmandu we checked out the options and subsequently enrolled them into a private school.

On returning to New Zealand we approached the Nepalese Consul in New Zealand, Peter Gibbs, who  said getting involved in educating children was a risky business and he advised caution.

It was not uncommon, he warned, for sponsors to be scammed by parents, schools and charities.

Even more worryingly, he said some sponsors inadvertently ended up supporting child trafficking, a major problem in Nepal.

In 2014  we visited Amrita and Ramita and the transformation was amazing. They had quickly learned English and loved their new life in Kathmandu.

Last May  we returned to Nepal to see how they were doing after the earthquakes. Their reports showed they were hard working students who were doing well.

We also visited Irish charity  The Umbrella Foundation which is  involved in combating trafficking of"paper orphans".

It frustrates her that New Zealanders continue to volunteer and come back with stories about the "cute" kids they have met.

Rather than spending money on visiting Nepal, she said it would be much better if they gave money to organisations such as YETI or Umbrella.

"By supporting these organisations your donation helps employ dedicated Nepali welfare staff which provide for the care, education and ultimate reintegration of these former 'orphaned' children."

Google Nepal Volunteer Orphanages and you will find plenty of sites offering the opportunity to volunteer in an orphanage.

But Umbrella spokesman Scott Rosefield said up to 85 per cent of the children were not orphans.

When children tell the foreigners, who pay to volunteer to look after them, about their parents they are beaten.

The story Rosefield outlined was a grim one.

Parents in villages like Patle are approached by community leaders and are told of rich foreigners prepared to pay to educate their children in Kathmandu.

The parents pay the scammers, believing education is the way to get out of poverty.

There are approximately 600 orphanages in Nepal and many of the children in them are trafficked to India to work in Mumbai brothels.

Some in the orphanages are abused by foreign paedophiles who have easy access to the kids.

Rosefield said New Zealanders often volunteer to work in the orphanages, despite the best efforts of organisations like Umbrella.

Some countries, including the United States, run travel advisories and Lonely Planet has put a warning in its latest Nepal edition.

Although he understands why New Zealanders get conned by the opportunity to work with cute kids, Rosefield noted there were plenty of warning signs that all was not what it seemed.

All the orphanages are in the three main tourist destinations and there was no plausible reason why there are so many orphans.

Their websites often blame dthe civil war or AIDs but the civil ended many years ago and the rate of AIDS is very low.

On the day we visited Umbrella, the Nepalese police shut down three orphanages in Kathmandu.

Rosefield said that was a good result and the culprits would hopefully be jailed. However, getting the police or the government to take action was not  easy.

Children were effectively a tradable commodity.  Those who profited from orphanages and trafficking were hard to combat when there was so much money involved.

It is money that also drives the exploitation of porters.

Trekking is a big money-making business and with so many men like Ujir and Ganga it is easy to keep wages low.

At the end of every trek, the trekkers are encouraged to pay a tip and give the porters boots and other gear.

Even on the highest and most dangerous passes, it is common to see porters in plastic shoes or sandals.

Although trekkers have paid thousands in airfares and fees to a guiding firm, the tips are often pathetic.

If you are thinking of going to EBC spare a thought for that wiry man with a cheerful smile who makes the trip possible.

And don't, without very carefully personally checking it out, sponsor or volunteer to work in orphanages or schools