Last Surviving Nuremberg Prosecutor Aims to ‘Save the World’

11 Dec 2016 – Ben Ferencz once worked under the glare of the world spotlight seeking the semblance of justice for crimes that claimed millions of lives. Today, seven decades later, his arena is a home office in a retirement village in suburban Delray Beach, but he says his battle is not won and he works daily to make sure someone will make the arguments against hate and war even when he’s gone. 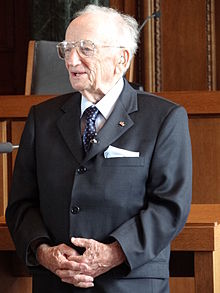 His fight begins with one sheet of paper in a gray folder.

It’s a list of nonprofits to which he is donating what fortune he has squirreled away in his 97 years. And with it he intends to save the world.

Most Kings Point residents move to the gated complex to spend golden years by the pool or on the greens, but Ferenz’s self-assigned duties won’t allow it.

He’s the last surviving prosecutor from the Nuremberg trials, the international hearings that began in 1945 to hold Nazi leadership responsible for the crimes of the Holocaust .

He was 27 when he argued, as chief prosecutor, for the convictions of 22 men.

Ferencz, a father of four and decorated attorney and military veteran, later wrote book after book calling for what would eventually be the International Criminal Court.

His pace hasn’t slowed even as he closes in on a century of life.

Tuesday, Ferencz hopes to spread more seeds of world peace with a talk at B’nai Torah in Boca Raton. The event is sponsored by United States Holocaust Museum, another recepient of Ferencz’s generosity. It received $1 million to promote the arguments for peace and understanding long after he’s gone.

“It’s up to the young people to carry on. I’m getting old you see,” said Ferencz. But the pace at which he’s trampling the grass around his condo while expounding on his prescription for the world’s woes would say otherwise.

“When I began, when Nuremberg began, war was the approved way of obtaining glory and power,” he said . “And for a thousand years, wars have been glorified in history.”

He lists Vietnam, Rwanda, Syria as avoidable mistakes of a world consumed by violence.

“Look, the current system is if the two heads of state are unable to agree, they take their young people, send them out to kill other young people they don’t even know, in a country they may never have heard of, who never did them any harm, and may never have harmed anyone,” Ferencz said. “They kill each other until they get tired of killing each other. Then they each declare victory. They rest. And they kill each other again.”

He calls for countries such as the United States, Russia and China to join the International Criminal Court, a tribunal that prosecutes global crimes against humanity.

“Aggression is not a national right,” Ferencz said. “It’s an international crime.”

Ferencz was born in Hungary and moved with his family when he was 10 months old to the United States . From humble beginnings, he attended Harvard Law School and, when the war broke out, was eager to serve.

He wanted to fly planes in the Air Force, but standing at 5-foot-nothing, he wastoo small, he recalled. So he joined the U.S. army where they put this law school graduate to work cleaning bathrooms. Then the Army went looking for attorneys capable of prosecuting Nazis.

It was at Ferencz’s urging that his trials even took place. He found documents that spelled out the number of people murdered by 22 men who kept detailed records of the killings.

As a sergeant in Gen. Patton’s 3rd Army during World War II, Ferencz visited a handful of concentration camps shortly after they were liberated.

“The scenes have been well-depicted,” he said. “Dead bodies lying around, you can’t tell if their dead or alive, their eyes beg for help. Dysentery, lice, rats, stench. Things that are not only indescribable, but unimaginable.”

That image, he said, changes one’s perception of war.

“ I refuse to accept that we, as human beings, cannot change,” Ferencz said.

And so when Ferencz is not caring for his wife of 70 years, who has Alzheimer’s, he’s talking to any audience he can find, and scouting for more nonprofits to add the the list tucked away in his gray folder that, he hopes, will carry the torch when he can no longer.